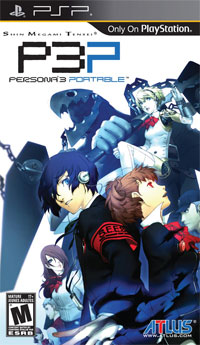 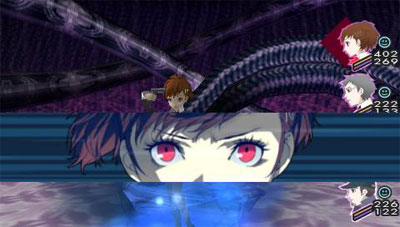 Persona 3, the shining light of role-play games, streamlines the experience on PSP. Its blend of social interactions and night-time dungeon crawling caught me up in the atmospheric world. The new female perspective adds a fresh social angle to the story and creates one of most involving and beautiful role play games on any system.

Persona 3 has long been regarded as one of the best Role Play Games to have been made. On PSP, the mix of social interactions and turn-based combat immediately became one of my most treasured experiences in gaming.

From the very beginning cut-scene I was struck with the eerie atmosphere. You watch as the game introduces the school setting and young characters. Although it starts of innocently enough, like the other Persona games you are soon embroiled in a complex story about the Dark Hour - the period of time between one day and the next where ordinary people are enveloped by coffins and malevolent Shadows appear.

The game quickly divides itself up into two distinct sections. During the day you go to school, attend lectures, form friendships or romantic relationships with classmates and generally do the things school kids do.

Blending a dating Sim with a traditional dungeon crawler is a bizarre mix but the implementation makes it all believable.

At night this changes dramatically as you battle the strange forces of darkness in Tartarus - the tower that erupts from the school during the Dark Hour - and levelling up as you would in a traditional Japanese style role play game.

These two phases of play interconnect and create an addictive rhythm to the game play as it moves from day to night and back again. On paper it shouldn't work - blending a dating Sim with a traditional dungeon crawler - but somehow Persona 3 is believable, provided you are willing to go along for the ride.

Forging friendships increases your social standing with them and enables you to create different Persona's to use in battles. It's simple but makes both aspects of the game immensely enjoyable and inexorably interlinked.

Playing Persona 3 felt like I was rewriting my history.

But more than the mechanics, it was Persona's deep and soulful experience that kept me playing. The setting of a high school should really put me off - when I pass my old school an icy shudder goes down my spine. But the other worldly Japanese take on this setting appeals to me. So much so that I found myself enjoying the social aspects of the game far more than the combat.

Playing Persona 3 felt like I was rewriting my history. While I play this game I'm a popular attractive guy, impressing classmates with charm and courting the pretty girls. It's escapism of the most literal kind - not only from my real life but also from my past - maybe that's why it has such an impact.

The game works hard to build relationships between characters and feeds you a breadcrumb trail of their stories. Impressively it manages to keep this up for a good 70 hours, pacing the uncovering tale and offering enough incentive to keep playing throughout.

The most interesting part of these relationships was choosing which girl I would pursue as a love interest. It may sound awkward but it's a compulsive part of the experience, especially when the girl I chose could only be courted right at the end of the game. Mitsuru-senpai might have been difficult to date but it made it all the more compelling.

Because you spend time getting to know Junpei, Yukari, Mitsuru, Akihiko and the others, when they confessed to being scared or afraid near the story's end there is a real weight to it. And when someone said they liked me in an embarrassed, cheeks-flushed kind of way, it had more romantic and emotional weight than Final Fantasy's highly produced cut scenes.

Persona 3 does take a while to get going though. Comparing it to the more recent Persona 4 is a little unfair but that game put you straight into the action and its process of confronting your shadow-side was much more dramatic. Persona 3 allows you a little too much time to get acquainted with things before the story gets going.

Its resolute understated tone offered a beautiful conclusion that its many hours deserved.

Once it does find its legs, things get rapidly more engaging. To it's merit, Persona 3 establishes a strong tone that continues throughout. Like a good book this raised all sorts of emotion in me as I played. For me this is where the real soul of the game is found. And it's where the various elements come together to create a significant experience that has stayed with me after playing. Not only that its resolute understated tone offered a beautiful conclusion that its many hours deserved.

As such, Persona 3 Portable isn't just the best Role Play Game for the PSP. I've found it be one of the best on any system. Even if you never hope to plough in the 70 hours in order to finish the game there's enough here to show what a deep and soulful experience Persona 3 is.

You can support Adam by buying Persona 3 Portable