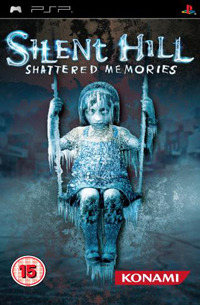 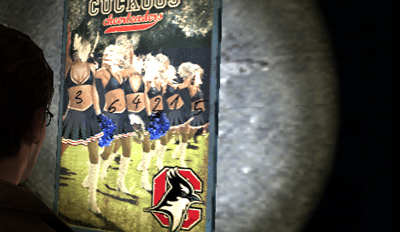 Breathing an icy-like blast of fresh air into a tired franchise, Silent Hill: Shattered Memories for the PSP is a beautifully atmospheric and thoughtful re-imagining of the Silent Hill series. The way the game profiled me as I played meant the emotional story carried far more weight than I was expecting. Though it never went as deep with the issues of family, love and sex than I would have liked, it still gave me an unsettling experience that lives long in the memory.

Silent Hill has always been a series that's intrigued me with its psychological and tense horror. It's also been a series I've never had the chance to experience first-hand due to never owning a PlayStation 2 during its heyday and being put off by the criticisms regarding the combat system. Fortunately in this re-imagining of the very first game, Climax Studios have completely removed the combat and replaced it with 'nightmare passages' in which you're pursued by grotesque pale-skinned monsters.

As Harry Mason the vast majority of the game is spent exploring Silent Hill after your car crash, searching for your missing daughter in the snow-bound town. Though the transition to the nightmare stage is dramatic, with icy glaciers suddenly rising to alter the layout of the town, I found these sections becoming irritating distractions from the real story. It's a lot better than putting needless combat into the game like so many Silent Hill games have done before, but only in the latter stages do these labyrinths become more meaningful through abstract design and some nightmarish imagery.

The way the game presents these characters according to your profile during the therapy sections is only one part of what made Shattered Memories a unique and involving experience.

The exploration of the town is what held my interest the most and Silent Hill is a creepy and disquieting place to explore at night. Hit by terrible snowstorms, most of the town's inhabitants are seemingly missing or locked indoors and you meet only a few characters as you search for your lost daughter. The way the game presents these characters according to your profile during the therapy sections is only one part of what made Shattered Memories a unique and involving experience.

I wasn't aware of this at the time but the game will change the look and the attitude of the characters according to what items you look at or what buildings you enter. It's a subtle process and one that gave me an insight, maybe, into my own character. At regular intervals the game will draw you back to the therapists couch and I found myself looking forward to these sections more than any other in the game. The form filling and activities this unconventional therapist got me to do felt ordinary - but this lent such a sense of believability to the game that I found myself being more honest with the answers I was giving than I've ever been with real people.

I couldn't help but carry this over into the main game and it helped a great deal that I was playing this on the PSP. If this had been the Wii version of the game then there's little doubt my decisions would have been much more edited for a living room setting. But on the PSP Shattered Memories developed into a personal experience where I looked at the cheerleader posters, glanced at a woman changing her clothes and told the truth about my feelings regarding sex, fidelity and family. As such the woman in the game came across flirtatious; they wore far more revealing clothes than on a subsequent play through and the ending I received genuinely made me feel a little remorseful for my actions.

At regular intervals the game will draw you back to the therapists couch and I found myself looking forward to these sections more than any other in the game.

I won't go so far as to say that the game succeeded in getting inside my head and figuring me out to an alarming degree. I could tell when the important decisions were having an effect on the game but the smaller and insignificant actions I took stacked up and played out in a way I wasn't expecting in the end. This is Shattered Memories greatest achievement and also highlights a potential failing. It does such a good job of bossing you around in the therapist sections and of taking note of whether you're looking at pictures of semi-clad woman or beer bottles that I wanted it to go deeper. I wanted the game to double in length, cut out the unnecessary nightmare parts and really start to understand my psyche.

As it stands Shattered Memories does a good job at only going partway with this approach and the pay-off in the final few minute's leads to a surprising and interesting conclusion. I won't say that I was completely taken by surprise at one of the twists and the game narrowly avoids cliche by making its final twist subtler and, if I'm honest, much sadder than I could have predicted.

Once the game had ended it made me think about what I had done during my five hours in Silent Hill and why I had done it.

Once the game had ended it made me think about what I had done during my five hours in Silent Hill and why I had done it. Did I really stare at the lingerie store because I've got an obsession with sex or was it because I could do it in a video game and get away with it? Did I constantly phone Michelle and Lisa because I have problems with infidelity or because game mechanics require me to be exhaustive in figuring out my options?

It's a game like this that I adore the medium for. A psychological film or book will only go so far and my ability to interact with those mediums is passive. With video games I feel I can get a stage further and really start to craft my experience and make the story as personal to me as possible. Bringing up family, school days, sex and relationships in this manner made me stop and think about my own experience and feelings about them.

Silent Hill Shattered Memories will probably feel like a shallow version of the series best to those veteran players. But as a standalone title it represents the small niche of video games that are intelligent, thoughtful and meaningful in their intentions and delivery. There aren't many cheap scares or deeply disturbing elements to Shattered Memories, but the overall experience left me pondering my actions and maybe just understanding myself a little better too.

You can support Adam by buying Silent Hill: Shattered Memories