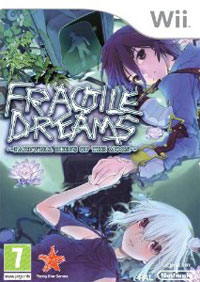 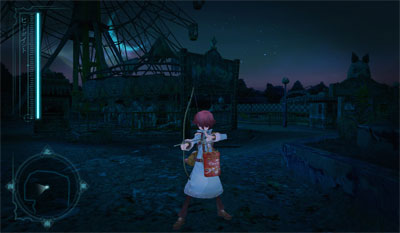 The mournful and delicate atmosphere that Fragile Dreams Wii manages to create within the first few hours is spent all too soon on awkward combat and needless back-tracking. I was moved by the storyline and character's melancholy journey through a ruined and dying landscape, but the aged design too often made me more frustrated than enchanted.

The post-apocalypse has been well served by video games for many years, but this title from Japan had its own unique twists that initially endeared itself to me. The distinct and meditative atmosphere from the beginning of the game interested me and I was willing to look beyond its narrative flaws and awkward dialogue in order to experience its vision.

Playing as Seto, a young boy who buries his grandfather at the start of the game, you set off in search of other survivors after an unnamed catastrophe has struck the earth. The deliberate way the details of this disaster are kept hidden made the premise seem much less about the post-apocalypse and more about the human condition after such an event. It focused on the preciousness of contact between survivors after a terrible event and the regrets left by such crippling loneliness.

I could feel the loneliness and forlorn emptiness of a world after a devastating disaster and the long aftermath.

One of the most touching moments occurs early on when one of the characters you meet turns from antagonistic bully to fast friend within moments. The surprising embrace between the two characters has a power that was unexpectedly hilarious and moving at the same time.

Fragile Dreams was at its best here, portraying a character whose unlikable nature hid a tragic past that was only revealed after hours of play. I could feel the loneliness and forlorn emptiness of a world after a devastating disaster and the effect that could have on human interactions in the long aftermath.

If only those moments were more frequent they could have papered over the flaws Fragile Dreams has. Though the meditative style works beautifully with the creepy spirits you have to combat along the way, it still feels an unnecessary video game conceit next to the story.

The same applied to the quests that are arbitrarily bestowed. Fetching items for random ghosts is tiresome when, with a basic smattering of narrative in the right place, the game could have built a compelling reason to revisit these previous areas. Instead, it turns the beginnings of a deep experience into a dull and formulaic action/adventure.

I was reminded that this was a video game and not the melancholy meditation I initially has hoped for.

The fetch questing was often given a nice twist when you learn the object's meaning back at the campfire. But instances such as this were rare and only happened if I was prepared to explore every nook and cranny of the world. Only then did Fragile Dreams reveal some moving and lengthy memories.

The combat system ruined this exploration at nearly every turn for me though. A poor depth of field and awkward camera reminded me that this was a video game and not the melancholy meditation I initially has hoped for. Silent Hill: Shattered Memories did a great job of removing the combat for something more terrifying and I couldn't help but wonder how much more effective the world and story could have been with that approach.

This frustrating combat also led to boss fights that felt unnecessary against the quieter narrative the game excelled at. I'm tired of having experiences like this ruined by an antiquated design that still believes fetch quests and the constant respawning enemies somehow makes the 'game' more legitimate.

This conflict between old design and the story/narrative of the game is what I struggled with most. By turns, Fragile Dreams had enough delicate and touching scenes to outweigh its faults, while also abundant with flaws that broke that potential. I dearly wanted to love this game for its eerie and emotional tale but it just strayed into old video games problems too often for it to be the soulful experience I desired.

You can support Adam by buying Fragile Dreams