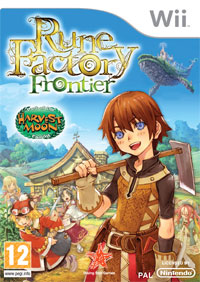 Visually stunning, Rune Factory: Frontier Wii offers more features and better dungeons than my beloved DS version. Although this should have resulted in a deeper and soulful game, the transition from handheld to home console came at a price and lost the intimacy that so endeared me to Rune Factory. Despite overall improvements I still prefered the DS game.

Fresh from my DS experience of the first Rune Factory I was expecting this Wii version to be nothing more than a graphical touch-up rather than a true platform upgrade. My first impressions certainly bore this out as Frontier took the Rune Factory world and presented it in a stunning 3D way. The fields finally looked earthy, the grass and trees seemed to dance in the wind and the magical elemental creatures added an ethereal sparkle to the world. It all felt enchanting to be in this world on a home console, meeting new people and just scouting out the land.

Thanks to its upgrade on the Wii, Rune Factory: Frontier throws in a few anime inspired cut-scenes as well. On the Wii there's a little more guidance at the beginning of the game as it introduces each element of the world. Even my impatient self enjoyed these small errands in the beginning and I found the entire experience much more compelling than the first few hours of the DS game.

On many occasions I happily dove into the fantasy that this game was a Hobbit simulator and I was living the good, earthy life as a farming Hobbit

Usually the open-world nature of games like this tend to lack the narrative or deep meaning that would normally enchant me. Just like the DS iterations though, I found myself creating my own world once again and falling deeper and deeper in love with the gentle pace of the game. The story that pushes the game along centres on the mysterious Whale Island that hovers above the land and threatens to fall down. It's a gently endearing tale with no rhyme or reason to its premise or execution.

Just like so many other people who play this game I'm really not too bothered about the overall story. Rune Factory is at its best when it just gives you the tools you need to mange crops or go off dungeon crawling - and Frontier excels at both of those pursuits. Unlike the DS versions I found myself enjoying the combat much more on the Wii. The dungeons are much more detailed, easier to navigate and the controls vastly improve the basic combat system and make it fun to play.

Even though I enjoyed this aspect of the game in passing I have to admit it added little to the soulful experience I was after. Those moments came in incidental dialogue and Frontier has some surprising moments hidden away if you happen to be in the right place at the right time. It's just as well those moments exist as the cast of Frontier is much smaller than on the DS and the town feels remarkably sparse in comparison. Sometimes this can work to Frontier's advantage as I ended up spending much more time with this collection of characters than any others previously and feeling more invested in this tiny community living inside the Wii.

For all this praise the game it still doesn't compare to my experiences with the DS version.

Though I try not to focus on visual quality it's hard to ignore Frontier's beautiful presentation and the effect this had on my experience. The seasons are marked with just the right visual cues that they evoked the right kind of feeling when I saw them on the screen. I adore autumn for its rich and vibrant colours in nature and Frontier succeeded in making the paths and fields appear just how I imagine them in my mind. On many occasions I happily dove into the fantasy that this game was a Hobbit simulator and I was living the good, earthly life as a farming Hobbit, working the fields, cooking a bountiful dinner and heading off to the pub in the evening. It's a wholesome feeling that gave my time with Frontier the same heart and soul I had enjoyed from the first game.

For all this praise the game it still doesn't compare to my experiences with the DS version. It's not because of the control system or because the gameplay or essence of the experience has changed greatly, it's simply down to having that intimate connection with a handheld system. The convenience of just opening theDS and putting ten minutes into sowing new crops or progressing in a dungeon is gone now it's on the Wii. Now it feels more like a solid commitment for a couple of hours to get that same level of ownership over my farm or investment in the world.

To Rune Factory: Frontier's credit, the game is just as addictive whatever path you choose to take. The beautiful visuals add a distinct atmosphere with each passing season and if you're prepared to invest the time, Rune Factory Frontier will enchant and delight as much as you want it to.

You can support Adam by buying Rune Factory Frontier