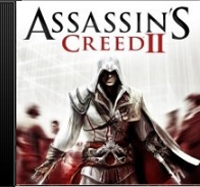 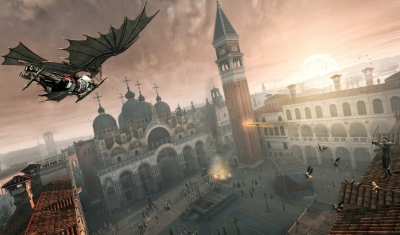 Successfully blending a modern-sounding soundtrack with classical themes, Assassins Creed 2 is a beautiful album that enhances the Renaissance setting of the game. Even away from the console, it doesn't lose its power and stayed in my Walkman long after finishing the main experience.

Both the Assassins Creed games have used distinctive settings to create interesting and rich worlds for the player to discover. In the soundtrack to Assassins Creed 2 Jesper Kyd has created an equally beautiful work that balances the rich classical themes of the Renaissance with the modern world.

It marks an improvement over the first game's heavy, overly moody, synths that to my ear lacked the ethnic themes that evoke religious fervour in the Holy Lands. The ambient samples are still there in Assassins Creed 2 but are now a springboard for more developed melodies.

In the first disc of this double album, 'Earth' gently begins with an acoustic guitar solo before quickly building to include the human voice, electric guitar, and drums in a cacophony of noise that smoothly resolves into a pulsing and epic theme.

I found the soundtrack offering just as much atmosphere as the visuals and art-design of the actual game.

The main theme reprises several times throughout and spawns some subtle sub-themes that vary both tempo and instrumental well. From the piano in 'Sanctuary' to the solo violin in 'Tour of Venice' I found the soundtrack offering just as much atmosphere as the visuals and art-design of the actual game.

'Home in Florence' stands out for its delicacy and ethereal voice laying a calm melancholy on the player. A timely if temporary sanctuary away from the darker tones of the game.

Listening to this again, I'm reminded that it's these voiced tracks I return to the most though. Whether the counter-tenor in 'Dreams of Venice' or young soprano in 'Flight Over Venice', these voices connect directly with rich suggestions of another world.

This can easily backfire, sounding self-important or overpowering, but Kyd judges it well, adding legitimate weight where it's needed. The voices embellish a theme or haunt dramatic moments and really add substance to the action, as well as general listening dynamics.

It's a funny thing to say, and marks how far game music has come in a short time, but Assassin's Creed 2 is one of the least videogame-sounding soundtracks I've heard for a long time - I happily recommend it to non-gaming friends. There were frequent moments when I simply enjoy it as legitimate neo-classical music.

Even divorced from the game it still gave me goose bumps.

'Home of the Brotherhood' ups the ante with its guitar-led melody. The raw edgy sound is suitably unsettling alongside the game's Mediterranean vignettes. This contrasts with the more rhythmic 'Flight over Venice 2' and 'Venice Escape', which build to include faster more energetic guitar licks.

'Approaching Target 3' is most tied to game play, directly capturing that dark and unsettling build-up to an assassination. The grinding beats and uneasy synth really give the impression of time running out whilst the crying soprano sounds like lament for the inevitable murder. These tracks are all about tension and atmosphere, something the soundtrack builds up expertly and even divorced from the game it still gave me goose bumps.

In many ways the Assassins Creed 2 sound track is more listenable than any other album I've reviewed to date. The classical samples give it a longevity that others, like the equally compelling Mass Effect 2 tracks, simply don't have. I found it easy to put this on in the evening to listen to alone, or as backing for entertaining. If you've appreciated the music in Assassins Creed 2 or simply want to broaden your music library then you'll enjoy this.

You can support Cat by buying Assassin's Creed 2