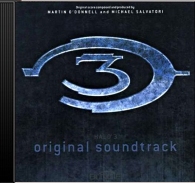 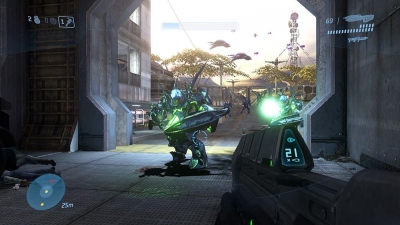 Halo 3's CD soundtrack, although deep and moving, struggles to sustain human emotion or prolonged motifs. Instead, it's the game's chronology rather than listener that is best served.

Orchestral soundtracks, for film or games, are not listener friendly by nature. This is music designed to enhance the drama of its particular scene and not necessarily work as a complete piece.

While I missed the steady development found in other, easier, classical music, the Halo 3 soundtrack put enough work in to keep me interested. However its inability to stick to any particular melody or style for more than two minutes made it hard going.

The soundtrack is split across two discs, which I think in itself may be telling - there is simply too much material included. Rather than editing and rearranging the tracks for the living room listener, this is simply all the music from the games laid end to end.

When the Halo 3 soundtrack manages to stick to one motif for long enough, the curtain draws back on a marching landscape of stirring strings and drums. Sadly though this is rare - it simply jumps around too much.

I get a taste of this with "Sierra 117" and "Released" that connect strings with remembered imagery from those 360 battles to create moments of real promise. Settling into this, reaching for my glass of red I'm soon shaken out of that moment by the club concoction of "Infiltrate".

This eclectic rollercoaster continues through the first disc as I move from "Honourable Intention 's" forced march to "Last of the Brave's" balletic drama. I'm soon plunging into the Airwolf inspired Bontempi keyboards of "Brutes" and on into the sad choral Miami vice strings of "Out of Shadow".

It's something I didn't notice when playing the game, but in isolation it's clear.

As the style and melodies rain in, and I plough on regardless, there emerges a general militaristic tone. It's something I didn't notice when playing the game, but in isolation it's clear.

Although the game is able to bring its focus down to a few individual personalities that matter amongst the warfare, the music seems more concerned with the disembodied military machine. The soundtrack, unlike the campaign, marches on to its objective undeterred by human loss or emotion.

Amidst the swirling variety of the latter half of the disk I do find a few softer moments though. "Follow Our Brothers" draws on the defeated races of Middle Earth as it recreates its own "Into the West". But as soon as that flickers on the horizon it is taken away and we are back to the forced march of war.

With the second disc fresh in the player it feels like we may finally find a sustained musical statement. "Three Gates" offers more substance and starts to build a melody that makes my ears prick up. Although this all quickly erodes it returns in the reprise of "Black Tower" - enough to make me sit up and draw breath as I strain to recall the story this comes from.

Unlike the success of the chaos and unpredictability in the game, this doesn't work in the soundtrack.

Finally in "One Final Effort" space is afforded to let the tune ring out. Although it doesn't stay until the end, there is enough to keep us listening until the powerful Gregorian chants arrive in "Roll Call" and it feels we are finally back in familiar territory.

The Halo 3 soundtrack was hard work. Unlike the success of the chaos and unpredictability in the game, this doesn't work in the soundtrack. Some hard editing and reorganisation of the work into something more listenable - even at the cost of chronology - would have made the experience much more enjoyable and maybe even something I could imagine repeating.

As it stands, this may remind gamers of the time they spent with a very great game, but it's simply not a well thought through piece of music in its own right.

You can support Cat by buying Halo 3