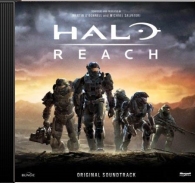 Halo Reach's soundtrack finds a human voice in the defeat and fragility of Team Noble's plight. While still not lingering long enough to discover just how deep it runs, there is enough substance here to warrant repeat listens.

Halo Reach extends the musical range of the series considerably. But it's the Soundtrack's licence to rework the material on its own terms - rather than sticking religiously to the game's pacing - that makes it a more enjoyable, listener focused experience.

Even after a single listen there is a sense of coherence here. Although it still moves too quickly from theme to theme, there is less shock and awe about this than in previous Halo soundtracks.

"Overture" starts the work off with a clear statement of this intent. There is a move away from the Bolero marches of Halo 3 towards ancient Arabian choristers. Quite how those all meet is a mystery to me too, but this is distinctly the response I had to the opening.

This swells through minor strings and noble (ed: careful you know how we feel about puns!) horns until it finally arrives at an almost Bowie-esque Space Odicy.

I'm led from here into the deep rumble of "Winter Contingency" and the drums that clearly evoke the mistaken delving of the dwarves of Moria, all supported with brass tones. There is a warning here of what is to come, and it is as unsettling played alone as in close proximity of the game.

"Oni Sword Base" offers a percussive industrial break that crescendos into choral-like imperial strings. "Nightfall" then picks up the pieces with whispered songs and aircraft blades billowing around in the wind. It's a sad metallic birdsong.

I'm thankful to have a little less doom and gloom to engage with for a while.

"Tip of the Spear" is the first of the proper marches. Through more Arabian melodies and into patriarchal chords it plods and I'm thankful to have a little less doom and gloom to engage with for a while.

Sadness permeates though as both "Long night of solace" and "Exodus" work with a canvass of slow inevitable defeat. Hope rises in "New Alexandria" that calls to mind the strength of cities and the ingenuity of a race desperate not to be wiped out.

The doom here is matched by a power just as unnerving.

But unlike the quiet hope of Lord of the Rings, the doom here is matched by a power just as unnerving. There's a sense that what is needed to save us from this disaster is as imposing and worrying as the catastrophe itself. An almost opposite saviour to a diminuative light footed Hobbit, Master Chief and all the sacrifice that surrounds him offers a future with more of a price.

I know this is stretching things. But it's the chance to play with these ideas that I love about game soundtracks. There is never time for this in the game itself, but here I can ruminate on what is happening in the story without rushing off to engage in the next chapter.

The broad range of music continues with "The Package" and Greensleves-like strings that break to bubbling voices. Although it's impressive, I still get the feeling that we'd be better served by a harder edit and greater development of what I've already heard.

But then before I knew it I'm out the other side blinking in the choirboy sunlight of "The Pillar of Autumn" and "Epilogue" as a solitary piano stands alone to bring us home.

Reach's soundtrack has become something genuinely human and moving.

Halo Reach is a very good game, and rounds off Bungie's impressively sustained delivery. The soundtrack however is more than simply more of the same. What felt awkward and forced in the previous games, in Reach has become something genuinely moving.

It's not the easiest game soundtrack to enjoy, such was Greg Edmondson's freehand with Uncharted it is still hard to beat, but it is one I'll easily return to for further listens.

You can support Cat by buying Halo Reach