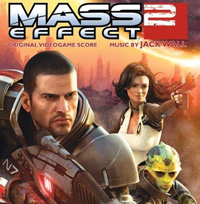 Mass Effect 2 has a strong brooding soundtrack that evokes characters and themes from the game. The darker themes that blend throughout and the overall quality mean this should be an album any sci-fi fan will enjoy.

Jack Wall's original soundtrack for the first Mass Effect was a chilled-out piece of electronica, heavy on repetitive synth and evoking the feel of a 70's sci-fi series, perfect in tone for that particular videogame. But for Mass Effect 2 the lightness and airy nature has been replaced with some epic orchestral pieces, blended together perfectly with the same synth sound to create a darker, more epic soundtrack befitting the sequel.

Initially the start and end of the album impressed. The swelling tone of The Lazurus Project and the reprise of the main theme from the first game in The Normandy Reborn did an excellent job of giving me goosebumps - the subtle way the motifs are brought back give it a depth that few other soundtracks can manage. The Normandy Reborn is the type of sweeping score that could easily accompany the unveiling of the Enterprise with its triumphant themes.

These tracks that play alongside the significant moments in the game are always some of the best on any videogame soundtrack, but I was surprised to find many of the incidental numbers just as in quality. The majority of the double album contains one track for each of the crewmembers you recruit in the game and these are all significantly different and interesting to listen to.

Here the unsettling beat of the title music explodes into a reprise of the main theme that sounds full of desperation and reaches a climatic end that's almost operatic in scope and delivery.

Repeat listens however developed other favourites for me. Miranda, with the strong three-horn blast that slips into a few melancholic passages towards the end. Jacob has a relentless, pounding sound that builds like a rising tide towards its conclusion.

Very different by no less evokative, Samara is a beautiful and exotic piece with Middle-Eastern themes that grant it an alluring feel. Thane feels more cinematic and motifs that brought to mind the Gollum/Smeagol theme from the Lord of the Rings soundtrack. But the best of these character pieces is Mordin. The music here introduces some wild synthesiser sounds that feel like they could have been used in some 70's Dr. Who episode, only with more epic backing and coherent melodies.

If the 70's synth is a homage to those classic sci-fi series from the UK and US then the discordant sounds of Freedom's Progress is surely a nod to the film Aliens. Even the moment when you hear that track in the game, you're creeping through an abandoned human colony that could easily be that of the film and this Collector theme that runs through many of the other tracks does a great job of sounding alien and unsettling.

It never feels over the top and there's enough individual melody in each track to make it a great listen on its own.

This serves to illustrate how rounded an album this is. All too often videogame Original Sound Tracks are filled with sub one-minute pieces that might contain great music while in the game, but fail to be listenable in any other form. Batman: Arkham Asylum and Tomb Raider Underworld spring to mind.

The culmination of all these tracks comes with the epic Suicide Run. Here the unsettling beat of the title music explodes into a reprise of the main theme that sounds full of desperation and reaches a climatic end that's almost operatic in scope and delivery. It works by not keeping the reins tight where other soundtracks would let rip. A lesson I wish some Japanese RPGs would learn from.

I didn't expect the Mass Effect 2 soundtrack to be this epic, particularly after the gentler form of the original, but Jack Wall has created a great balance between orchestral/sampled instruments and the electric synthesiser sound. It never feels over the top and there's enough individual melody in each track to make it a great listen on its own.

You can support Cat by buying Mass Effect 2