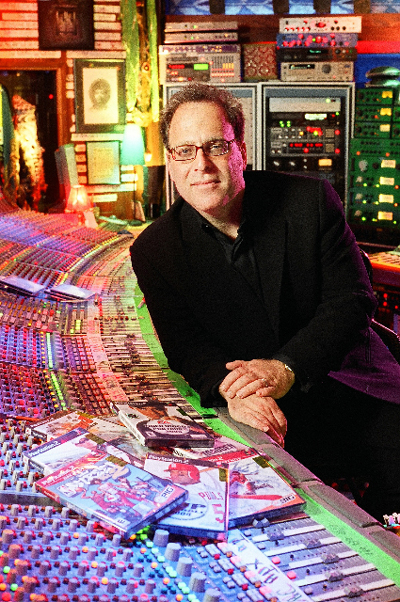 Music has always played an important part of our videogame experience. From the earliest 8-bit days when chip-tune composers eked out distinct melodies and sounds to convey atmosphere in a game, soundtracks have always added that layer of immersion if done correctly. In recent years as the bleeps and bloops of yesteryear faded out to more orchestral and modern soundtracks the rise of EA Artwerk label has played an important part in adding to the experience of modern videogames.

I recently spoke to Steve Schnur, the Worldwide Executive for Music and Marketing for EA, and asked him about the increased importance videogames play when it comes to breaking new artists and music. Over the past nine years EA has successfully launched the careers of several household names such as Good Charlotte, The Arctic Monkeys, Kings of Leon and Franz Ferdinand. These were all artists introduced to the wider through their use in many successful videogames.

'The defining moment' Steve says, 'was Madden 2003. Our objective was to create a soundtrack of new songs by bands you might not have heard of, but that we knew would be hits. Soon thereafter, we applied the same strategy to FIFA '04... It was also the year that Radiohead - who are notoriously reluctant to license their music to anyone - approached us about becoming involved simply because they were such huge fans of FIFA.'

This year in particular gave developers, labels and artists no choice but to take notice, EA had partnered up with Nettwerk Music Group to create Artwerk - a record label with a difference.

'Creating any great soundtrack is always about defining a game's audio personality the music we choose must fit the game's energy, trigger an emotional response and take gameplay to another level.'

Steve explains: 'The truth is that the traditional record label business model is now dead. Instead, today's new 'Digital Reality' demands that labels respect the consumers, the artists and the music, all while doing smart, fair, and innovative business on a global scale.' In such a saturated market place Artwerk had little choice but to take a difference approach and less than a decade after the success of Madden 2003, videogames have turned into a viable medium to break new artists to a wider audience.

This success compliments videogames well. I remembered being especially awestruck at the FIFA 04 soundtrack and the music that accompanied my import copy of MVP Baseball '05. It was the inclusion of tracks by Franz Ferdinand and Snow Patrol that led me later to purchasing their albums - a sure sign that EA's drive to include fresh new music in their games was working. It also stamped the games I was playing with a distinct sound and uniqueness that I was previously unaccustomed to.

'Creating any great soundtrack is always about defining a game's audio personality.' Steve asserts, 'the music we choose must fit the game's energy, trigger an emotional response and take gameplay to another level.' And since the creation of Artwerk, EA games have been getting more coverage from the tracks and bands that are on soundtrack, almost equalling the attention given to the game itself. Far from being a distraction Steve believes this elevates the game to an even higher level. When done right, the soundtrack will enhance the overall gaming experience. 'Our music must have the ability to make you want to drive faster, shoot higher, board better.'

'The only rule I have for my team is that they cannot listen to the radio or read sales charts.'

So how does Steve and his team at EA decide what tracks to put into one of their big releases? It's a challenge that carries with it far more responsibility than you might expect as the remit of a soundtrack for Madden or FIFA is to define the sound of the upcoming season. 'Keep in mind that every song in any game with a year in the title must always point forward.' Steve explains, 'Radio stations have the ability to drop songs from their playlist after only a few weeks, but our music stays in the game until the new version becomes available.'

It's a tough process and one that the team begins working on almost a year in advance. 'The only rule I have for my team is that they cannot listen to the radio or read sales charts.' Steve states, 'We keep an eye and ear on every independent label. We meet with plenty of publishers. We see a lot of bands and listen to literally hundreds of thousands of songs.' It sounds like a highly involved process and the risk is equal to the reward as Madden and FIFA have now become the foremost showcases for new music in the world.

With this emphasis and hard work being focussed on new music it's sometimes easy to overlook the original soundtracks to many games and how these have developed dramatically over the past decade. Only since the PlayStation era has fully orchestrated soundtracks begun to accompany games and the quality of this music has now started to rival Hollywood productions. But was it easy to convince film composers to take videogames, a notoriously easy political punch bag, seriously enough to compose for them?

'Once Hollywood composers understood the challenges, innovations and opportunities of scoring for videogames, they become our biggest supporters and most ardent collaborators.'

According to Steve it wasn't as hard as I thought. 'Once Hollywood composers understood the challenges, innovations and opportunities of scoring for videogames, they become our biggest supporters and most ardent collaborators.' he explained. Looking at the credits to many recent games it's hard to disagree with many top composers lending their talents to EA's biggest games such as Need For Speed, Medal Of Honor, The Sims, FIFA, The Godfather, James Bond and Command & Conquer. Steve even states that Junkie XL's recent score for Need for Speed: Pro Street and Christopher Young's score for The Saboteur are among his personal favourites.

Away from the EA and Artwerk stable this rise in quality is also apparent with Bear McCreary of Battlestar Galactica fame composing a tremendous score for Capcom's Dark Void, including an 8-bit remix of his own work. Dragon Quest VIII was completely re-scored for its western release with a full orchestrated soundtrack that is still lauded today, and Greg Edmondson of Firefly fame scored the soundtrack to Uncharted 1 and 2. Videogames now come with a high quality soundtrack or collection of new/licensed music as standard and it's partially down to EA and Artwerk that this high level has been reached. With each new iteration of a sports franchises being just as much about the new music than the new game it's clear that the merging of the record industry with the videogame world is complete.

This brave new world has already brought several new bands and composers to light that I previously would never have come across.

This brave new world has already brought several new bands and composers to light that I previously would never have come across. I asked Steve whether or not he thought this was how modern music would now be marketed. 'It already has' Steve replied bluntly, 'MTV is now dedicated to original programming rather than breaking new artists... the convergence of music and videogames has changed the way we hear, buy and experience our entertainment.'

The arrival and effect of Rock Band and Guitar Hero on modern music also can't be understated even if those franchises have started to stagnate. It's put new music at the forefront of a digital revolution that EA and Artwerk have pioneered for nigh on a decade and as Steve himself says, 'EA has not only changed gaming culture but also 'moved the needle' musically for millions of people around the globe. And this is only the beginning.'

You can support Cat by buying Interview with EA's Music Man