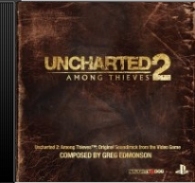 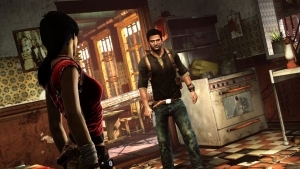 Greg Edmonson's Uncharted 2 soundtrack offers a Lord of the Rings epic emotional feel, while serving its videogame purpose faultlessly. Rousing, intimate, stirring and moody - there is more here than we have any right to expect.

Greg Edmonson came straight to the first Uncharted project from Firefly and, as he shared in his interview, an absence of involvement in Serenity. This is no bad thing as working on a game with Naughty Dog and Sony seems to have been the breath of fresh air he needed.

In this setting, his portfolio certainly carries plenty of kudos. Along with other synergies with the Firefly approach Edmonson creates an impressively filmic soundscape for us to play alongside.

Both in this second soundtrack as well as the first, that was available only in the US and only on iTunes, the music walks its own path. Unlike other gaming soundtracks there is an absence of the work being clipped into looping segments.

As you play Uncharted 2 there are moments where the music takes a noticeable lead, not pausing for the current action, or being very tied to on screen events. But this flexibility not only allows for some genuine moments of synergy but also for Edmonson to let rip with epic emotional movements.

This enables Edmonson to be more thematic than he might. There is a sense of building familiarity throughout as the album forms an identity of its own. Most evident with the opening Nate's Theme, but reflected elsewhere, the scale of the score is easily a match for the sweeping locations of the game.

Alan Steinberger orchestration feels to have embraced the core genius of Edmonson while opening things up to a wider range of instruments.

Edmonson again reaches for ethnic notes and percussion as he moves through rousing refrains. Even listening away from the game there is a stirring quality to the music that connects at a very basic level.

Alan Steinberger orchestration feels to have embraced the core genius of Edmonson while opening things up to a wider range of instruments. Recording with a 60 piece orchestra at Skywalker studios also adds to the impact and punch of the experience.

As with the game, this isn't simply adventure writ large. There are plenty of quieter sober moments. Like the exquisite "A bitter end" from the first album, "Reunion", "Breaking and Entering", and "Marco Polo" all move things into a minor slower key.

The bigger brasher moments remain, almost tongue in cheek though, "Bustin’ Chops" and "Brutal Combo Mambo" are perhaps the most memorable - for their names if nothing else.

For those who have played the game though there is another dimension - a hundred tiny moments brought to memory by hear that music once again.

Where the Soundtrack struggles most is for those looking for a listenable work as a whole. The piece each work excellently, but together there are some jarring moments. In the game these often work well, or go unnoticed, but naked in the listening lounge they can seem forced or even clumsy at times.

But these is a small price to pay for the good on offer here. On its own merits there is plenty of pleasure, for those who have played the game though there is another dimension - a hundred tiny moments brought to memory by hear that music once again. Either way this is an album that will stand the test of time for both gamers and muso's alike.

You can support Cat by buying Uncharted 2