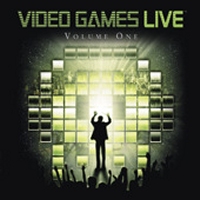 Video Games Live performs in-game music with a full orchestra. It's a fantastic trip down memory lane for the nostalgic gamer, and a wonderful celebration of the soundtrack composers' craft. It's also a clever way to revisit old classics without having to face how bad a game they actually were.

I have what my friends call strange taste in music. I prefer to call it widespread or, maybe, eclectic. Whatever you call it, hitting shuffle on my iPod is always an interesting experience as a multitude of genres end up mashed together. On the occasions when I know exactly what I want to listen to, though, it's more often than not Video Games Live.

I downloaded the album from iTunes after a friend invited me to a Video Games Live concert. I couldn't make it to the concert, but was so annoyed at missing it I decided to see what I could have heard. Suffice to say I wish I had been able to get to the show, but the album is an excellent second option.

There's music from current and past games - enough to capture my attention as a current gamer as well as someone who has a rose-tinted view of their gaming history.

I'm particularly fond of the Tetris Medley; the traditional Russian theme music played in a classical piano style. I've even managed to get a few people to listen to it and admit that it sounds good before revealing to them that it's the theme tune from a video game. Most of them just called me a geek and carried on with what we were doing previously!

If you have it on in the background friends are quite happy and, just occasionally, will stop and say, "Hang on, is that Halo!?".

That seems to be the funny thing about Video Games Live - if you tell non-geeks what it is before letting them hear it they look at you funny while backing slowly away. But, if you have it on in the background friends are quite happy and, just occasionally, will stop and say, "Hang on, is that Halo!?".

There are a couple of tracks that really make me stop and listen. The first is the Myst Medley. I remember seeing Myst for the first time and was captivated by its pre-rendered scenes. The combination of beautiful scenery and fiendish puzzles kept me enthralled. Hearing the music again transported me back to those days in a way actually playing the game wouldn't. I know that seems a strange thing to say, but I have no doubt that if I were to revisit Myst it would look a lot less shiny compared to some of the titles I can play today.

The other track that really grabs my attention is the live version of Castlevania. Castlevania was one of those games all my friends at school were trying to beat and, again, hearing the music transports me back. The thing is, I had Castlevania on the Commodore 64 - the Video Games Live version is just a little better than what the venerable SID chip could produce! You hear the crowd singing along to this one too, and the excitement is just wonderful. On several occasions I've been out in the car, cranked the volume up, and blasted the Castlevania theme out, loving every minute!

On several occasions I've been out in the car, cranked the volume up, and blasted the Castlevania theme out.

One great outcome of downloading the Video Games Live album is that I've let my friends' children listen to it a few times and had some great conversations about gaming. Because there's stuff there from today's gaming scene, and games from previous generations, we've been able to talk about the consoles of my childhood. They're stunned when I describe the NES, or the MegaDrive. The whole concept of loading a game from cassette or cartridge seems alien, until they remember that the Nintendo DS is effectively a cartridge system - it's just that the carts are much smaller than those of old.

I also love that, when we're listening to the music and discussing the games portrayed, they invariably come up with recommendations for new games I should try. The brilliant thing is they're usually right.

I wouldn't be overstating the case to say that I think Video Games Live is essential listening if you've been gaming for even a short while. The music is of very high quality and stands up to scrutiny even without the obvious geeky attraction. It evokes wonderful images and nostalgic memories. This will be on my iPod until the day it dies.

You can support Cat by buying Video Games Live