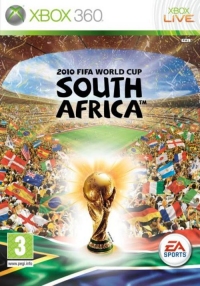 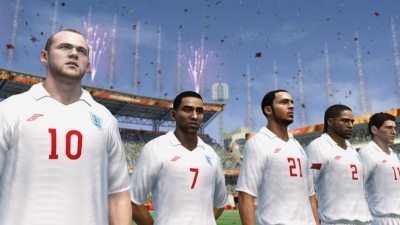 FIFA World Cup innovates alongside its official data to create a better game. Two button play, altitude fatigue and official team sheets and stadia combine to make 2010 FIFA World Cup South Africa all it should be.

There will no doubt be a plethora of World Cup video game jumping on the band wagon when the party starts later in the year. But as someone who has played and followed football pretty much my whole life, I still appreciate the officially licensed games.

Not only do you have the officially finalised team line-up and venues, but because the developers have paid to be the official game there is a greater onus on them to deliver quality. Looking back at my collection of World Cup games from Mexico, Italy, United States, France, Japan and of course Germany, there are plenty of titles punching above their weight. As well as a few I should have gone for a games rental rather than purchased.

Before I dig into the footballing detail here, this is essentially the FIFA engine with some tweaks. Although four years ago I wasn't so enamoured at having a FIFA World Cup game - back then I'd have preferred the Pro Evolution game that was in the ascendance. But, as I well know, a lot can happen in four years of football and the same is true in video games. FIFA is now the game that most agree offers the most fluid, enjoyable and realistic footballing experience.

2010 FIFA World Cup isn't just a copy and paste of the main FIFA 2010 game though. First off all 199 national teams that have taken part in the 2010 World Cup qualification are playable. All 10 World Cup stadiums are also included in all their glory.

Speaking as someone who has experienced the effect of altitude on performance, it was nice to see EA taking this into account on their player modelling.

Speaking as someone who has experienced the effect of altitude on performance, it was nice to see EA taking this into account on their player modelling. Here, there is a higher rate of fatigue for matches in stadia at higher altitudes. This combines with bonuses for teams playing in home stadium to give the setting much more impact on the game itself.

If, like me, you have put hours into developing your Virtual Pro in FIFA 10 you'll be excited to hear you can put them to work in the Captain Your Country mode. As in the FIFA Germany 2006 game this mode let's you lead you team to victory playing captain with your Virtual Pro. It's an unusual idea, but I really enjoyed the Role Play elements it introduces - in fact it had me going back to FIFA 2010 to get my player ready for the World Cup challenge.

Although I often overlook newcomer features, being a seasoned FIFA player, I like the idea of the two button play mode. Last year I struggled to find a competitive match with friends. We'd be together to watch the real matches and want to play some FIFA to get us in the mood. Then, as now, it was easy to rent a copy of the game and setup the games to match the one about to be played, but when we got into it I would have to hold back to give them a chance.

My friends can just worry about their tactics rather than memorising button combinations.

This year, 2010 FIFA World Cup South Africa has a two button mode so that anyone can compete. My friends can just worry about their tactics rather than memorising button combinations. Then they have one button for shooting and one for passing. Much better for the serious sports person than the dumbed down Wii-mote family-play options EA have dabbled with on the Wii. It also means if you do go for a video game rental your limited time won't hamper your enjoyment.

2010 FIFA World Cup South Africa is still FIFA, and admittedly you could buy the original 2010 cheap Xbox 360 game. But then you would miss all the buzz and excitement about feeling involved in the biggest event in the footballing calendar.