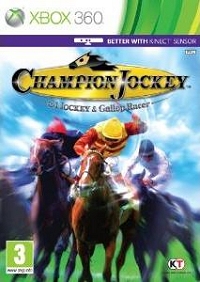 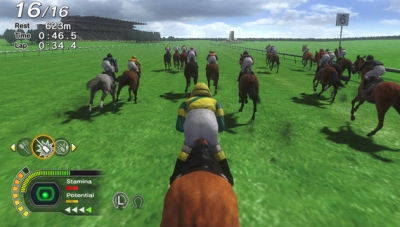 Championship Jockey 360 had a slim chance of surprising expectations. In reality though, it was the poor controls and uninspired navigation that made this a pedestrian experience -- rather than the sport it chose to simulate.

A jockey game is not the most exciting prospect, but as a sports title it can enable us to be in charge of our progress and to feel that the development of our character, team or skill is directly related to how we want to play the game.

I remember my team in Pro Evo 6 developing in a way that suited my style of play - it really felt that I was in control of my own destiny. Looking forward to the Grand National 2012 I sat down with Championship Jockey hoping for a similar experience but instead found a game that, in everything beyond the basic mechanics, distracted, annoyed and alienated me at every opportunity.

The menu system and graphics have more than a passing resemblance to the aforementioned Pro Evolution from 2006. While graphics are not the most important aspect of a game to me, gameplay is, I still want something fun, different, interesting to play. Something that flows intuitively, but this feels five years behind its contemporary sports titles and that is something that is definitely holding it back.

On entering the game I had to undertake a training mode which was basically a list of things I needed to learn to do. There was no attempt to make this fluid and I found myself becoming frustrated with the repetitiveness and unimaginative layout.

I didn't feel like I was learning the ropes to prepare me for my first race, but instead was going through a list of boring and random exercises that were all broken up. It really needed a tutorial mode that gave you a feel for the horse and for all aspects of racing, as this was not an immersive experience and it gave me no reason to get into the game.

Maybe the Kinect would help - using your own body as the controller is a great way to feel like you are part of the game, to be immersed physically in what is going on rather than controlling your player through a joypad.

My overriding is that it failed to make me care.

The problem with this is you have to use your controller for everything in the game but the racing. This completely broke any flow and at times I missed the start of the race while I was finding a place to put the controller down. I had to get a friend to activate the menus for me.

Even when I was racing, I found that Kinect didn't really immerse me. I usually just became frustrated that it wouldn't always respond to my movement as quickly or as accurately as I wanted it to. Kinect has had a family or casual gamer focus since its release but I wouldn't recommend this game for your family, as the racing is too technical for younger players and the rest of the game to bland for an adult.

My overriding problem with this game is that it failed to make me care. If a sports title can give us ownership - the buzz of winning and the disappointments of losing - we can forgive its horrible errors. Unfortunately, there were never any of those magical moments of pleasure when I won, or those feelings of outright despair when I lost. I felt cold and dispassionate towards the game, my character and the racing.

The game itself is really trying to give you choices. As you rise up the ranks from an Apprentice Jockey you can breed and train horses, choose which riding offers to accept, choose which races you wish to compete in and generally affect your standings with colleagues and stables with quite a bit of freedom - it just never quite sits right with all the other distractions. It is almost as if they designed all the surrounding aspects of the game to interfere and break up any chance of you getting into it.

If you are a horse racing enthusiast then you may enjoy the workable basic game mechanics.

I have played, and enjoyed, many sport titles without being into the sport at all (the excellent PGA series and, more recently, Madden 11) but this lacked any of the adrenaline and buzz usually associated with a sports game. The bottom line is that it is heads up against titles like Forza 4 and really needs to make a bit more of an effort.

If you are a Jockey, or a horse racing enthusiast, then you may enjoy the workable basic game mechanics. If not, I doubt it holds anything you will find even remotely satisfying.


You can support David by buying Championship Jockey