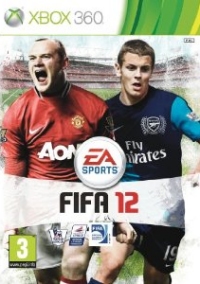 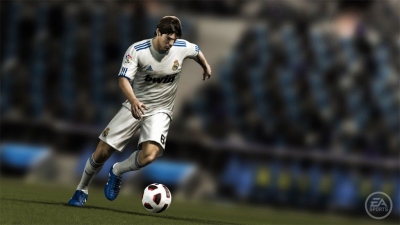 FIFA 12 connects movement and collision with its new impact engine, but its the series longevity that will appeal to real football fans.

If you play football, at any level, you will know that it is as much about tactics and positional play as it is about blistering pace and twinkle toed centre forwards. Perhaps the problem of the Premiership is that the viewing public demand this to be a beautiful game, when actually it's quite often more grind than grand.

When it comes to football video-games I've long been a fan of FIFA's more realistic approach to Pro Evolutions smooth slowing mechanics. Although FIFA wasn't so nice to watch, it captured the grit and determination of 90 minutes on the pitch and did away with the overly fancy stuff that Pro Evolution seemed to focus on exclusively.

Then, last year FIFA took things in a decidedly new direction. At first I was wary that it was simply capitulating to Pro Evolution's way of doing things -- having suffered under the bigger selling Konami game for some time. Happily though, FIFA 11 was actually its own game -- adding more variety and tactics into its solid football engine.

After these strides forward FIFA 12 had a lot to live up to, not least with a freshly re-envisioned Pro Evolution nipping at its heals. But again it seems up to the task. And again I'm happy that it hasn't succumb to bells and whistles but instead focuses on getting the basics right.

The result is a very playable football experience, that will also keep real players and fans satisfied in terms of realism. Much of this is due to the new impact engine in the game -- something EA Sports has worked on for over two years. This takes the physics of Fife 12 - both player vs. player and player vs. ball - into a new level of simulation. How each player addresses the ball and each other has a real impact in each encounter.

Whereas previously you have to ignore the odd strange bounce or clipped collision, FIFA 12 does away with much of this. The movement of the ball itself, and moments when player meets player new look much more like we know they should.

These new physics are bolstered by some substantially improved AI, finally this feels much more intelligent than artificial. Both at a team tactics level and the individual player decisions, especially in defence, simply work much better.

This all adds up to a representation of the game that not only looks but also moves like it does in real life. In fact, my wife walked in while I was playing and thought I was watching a match on TV.

Less impressive are the same old modes that wrap up these technological improvements. The usual suspects return - career, online seasons, ultimate team - all return, and while they certainly cover the basis I still think there is more scope here to create a greater sense of ownership and club level appreciation of the sport. While at a macro level - impressive with 15,000 players and 500 clubs - things seem less well catered for on a micro level - actually making this matter to the player where it still feels a little empty.

FIFA continues to build on its unique approach to football simulation.

My last gripe is one that comes from a stint looking after a local team's kit. If I had turned out our goal keeper in the same colour as the teams playing I would have had more than a few sour looks from both sides. FIFA seems oblivious to this aspect of the game, and regularly commits this cardinal sin.

On balance though, FIFA continues to build on its unique approach to football simulation. This year the headlines will be about its continued ability to win more players over from Pro Evolution, but for me it has been more exciting to see it stay true to its roots -- and players like me who have stayed loyal during the less popular years -- something any long term football fan will appreciate.

You can support David by buying FIFA 12