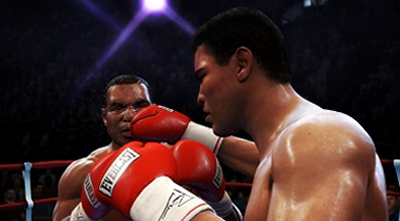 Staggering back against the ropes, I shield my face with my gloves and desperately urge my stamina meter to start replenishing. Sidestepping to the right, I manage to swing a massive right hand that connects perfectly, sending sweat flying across the ring mat and my opponent reeling. He's dazed, and I can move in with a flurry of quick shots to regain my footing in the match.

What I love about sports is the competition, the pitting of one person or team against another. This is something that, in boxing, is perhaps better represented than in any other sport. Firing up Fight Night Round 4 on Xbox 360 or PlayStation 3 for the first time and getting accustomed to the controls is the first step. Even after plenty of play time though, they can cause problems. I've lost count of the number of times I've gone for a particular shot, crucial in the situation I was in at that time, and the game just hasn't responded in kind, dealing out a different punch that misses and costs me the advantage in the fight.

Try not to smile as you pick out the perfect punch for the moment, dazing your opponent.

Mapping the punches to the right analogue stick is all well and good, but when it doesn't work, frustration sets in. However, the feeling when you do connect with the desired shot though is hard to match; try not to smile as you pick out the perfect punch for the moment, dazing your opponent. Or, even better knocking them out.

The main annoyance I had was the computer AI seemingly predicting your moves on the higher difficulties. Sure, some punches are easier to see coming than others, but when your quick jab or a swift uppercut is instantly blocked when you're close in to the other fighter, smacks of cheating from the CPU character. When a guy's dazed and staggering all over the ring, how can he predict which of my arsenal of punches I'm about to hit him with, to the head or the body, and with such good timing? This not only resulted in me crying out in disgust, but also the CPU bouncing back with unrealistically fast and accurate punches, despite mere seconds ago nearly being out cold.

More often than not, against decent opposition on a tough difficulty, I'd find myself in the same scenario over and over - the CPU character predicting my moves, and then when I stop attacking so as not to deplete my stamina completely, he'd come back guns blazing, with all manner of punches at lighting speed. I'd get knocked down, and it'd be match over.

Training is down right annoying, as it's as though the gym activities have been designed to be as frustrating as possible

I was able to combat this somewhat in the career mode, by training my fighter up to a ridiculous level, but that shouldn't be what it takes to get a fair fight from the game. Training is down right annoying, as it's as though the gym activities have been designed to be as frustrating as possible. The career mode itself dragged on as well, and so I found it better to return in short bursts rather than try and blitz through it. It does feel rewarding to build your fighter up and progress through the ranks, but I was disappointed at how long it took to really get anywhere.

The bottom line is that as far as realistic boxing games go, Fight Night Round 4 is the best out there. This is mainly because it's the only one out there, but it does have its merits. I enjoyed the detailed visuals, satisfying fights (on the lower difficulties) and the accomplishment of making a good fighter. The control and AI issues are frustrating, but can be avoided, so the game's well worth a look for anything interested in the sweet science.

You can support David by buying Fight Night Round 4