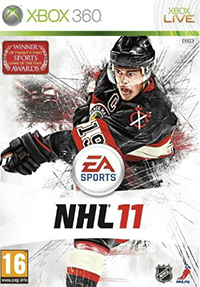 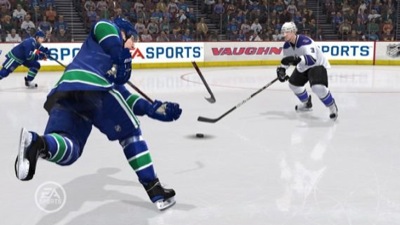 NHL 11 is a brilliant game, and well deserves to win as many plaudits as its predecessors. While it might not introduce any radically new features, it showcases lots of subtle additions and improvements that add depth and refinement to what was already an excellent experience.

Due to the relatively niche appeal of ice hockey this side of the pond, it's unlikely to reach the status of a 'must buy' classic over here, but for fans of the sport, and indeed sports games in general, NHL 11 will provide warm hands and hearts all winter long.

As I've admitted before, I have never taken to the ice for any hockey action -- and, in fact, due to an old ankle injury, have been medically advised to give skating a miss altogether. However, I am a keen-ish fan of the sport, and my enthusiasm was fuelled somewhat by a recent stint in the States during which I became fairly enthralled by the regular local coverage of the Philadelphia Flyers and New York Rangers Games (we were in New Jersey).

Despite my lack of on-ice experience, like pretty much everyone else, I've been raving about the NHL franchise for some time now. NHL 09 was the game that got both the fans and critics buzzing and made others outside of the natural demographic sit up and take note, and I think it became my favourite game of that year (certainly top three). Pleasingly, since then things have gone from strength to strength, with NHL 10 bringing the game modes up to speed with the wider EA scheme, and now NHL 11 bringing new levels of richness and finesse to the ice.

Right from the get-go NHL 11 seems snappier, brighter and bolder than its older cousins, and as soon as your team takes to the ice, its obvious that not only have EA updated the visuals, bringing a real crispness to the in-game visuals with considerable refinement of the players, crowds and arenas, but they have smoothed out the delivery, seemingly conquering the framerate issues that have slightly marred things over the last couple of iterations.

They slowed the pace of the game just slightly, in order to allow the action to be realistic.

They also seem to have incorporated a logic that I've been impressed with in other EA Sports franchises (notably FIFA and Madden) whereby they slowed the pace of the game just slightly, in order to allow the action to be realistic, but also controlled. Whereas the previously lightning speed of the action brought excitement, it did often mean that finesse sometimes gave way to flailing.

The engine has been substantially remodelled, with it now being fully physics, rather than animation, based, and the results are extremely impressive. It now feels like everyone on the ice is responding dynamically and without limitation - gone is the slight sense that collisions and certain passages of play were interpreted through a restricted palette of set-pieces, it now really feels like anything is possible. Realistic checks and slams, a more complete stick control mechanic, the ability to brake and exchange sticks, the ability to kick the puck and several other small improvements all make the feel of the game more authentic and complement the new physics perfectly.

It has a pleasant calmness and elegance about it.

While the controls still feel snappy and the scheme remains as intuitive as ever, the passing mechanic has been tweaked in line with the slightly slowed pace, and the new technique for rapid, accurate passing requires a slight shift in timing, with the release rather than the pull of the button triggering the pass. As a NHL veteran, it did take my a little while to adjust, but just as with the wider pacing changes, I found in time that I was able to be more tactical and more intricate in my play. Improvements to the face-off have fully incorporated what used to feel like basically a part of the cut-scene more fully into the game, with pushing, reversed grips, blocking and shooting all now possible in the circle. The AI is as strong as ever, and the new, more dynamic collision system in particular adds an extra dimension to battling it out with the best the game has got to give.

In addition to the returning Be A Pro and Be A GM modes, which now benefit from the inclusion of a hugely expanded array of junior teams, we also get Ultimate Team. Fans of Madden and FIFA will be familiar with the trading card based format (something of a gimmick for my tastes), but in reality only hardcore hockey-heads will really have the required knowledge and patience to get the best of out it. I tried, dear friends, but I was just too confused and bored by the superabundance of features and stats that govern the successful assembly of an unbeatable roster. I'm sure it's all great though, if you like that sort of thing.

Focusing on what I could grasp, what I find most pleasantly refreshing about NHL 11 is that besides the numerous tweaks and improvements, very few of the things that worked really well in the last game seem to have been tampered with. This means NHL 11 brings with it the relatively and bafflingly rare sense that it is a genuinely straightforward improvement on its predecessor. It has a pleasant calmness and elegance about it, and this kind of combination of deep but subtle tweaking and remodelling of certain aspects, with the confidence to leave alone the things that already work well is something you only really get from the likes of EA. While the colossal status of an outfit like theirs can bring (and has occasionally brought) problems: arrogance, sloppiness, too much gloss, not enough soul, etc., here we see the profound strengths of being an undisputed market leader with a drive for perfection.

You can support David by buying NHL 11