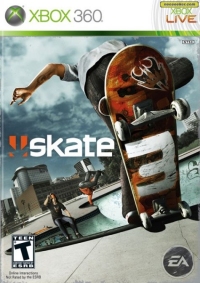 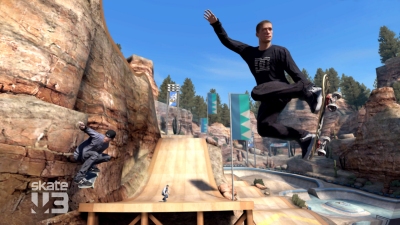 Skate 3 courts the mainstream with sales targets and an all new, squeaky-clean city as well as team play, Own It and Kill It awards for each challenge and a much expanded online experience. However, despite several improvements, as a former skater, a part of me is mourning the loss of the rough-edged, dissenting streak of the previous outing.

As you may remember from last year's glowing review, I was a big fan of EA Black Box's Skate 2 and indeed, after reviewing it, I went on to invest another 30 hours in completing the entire game - which I don't do that often anymore. Well, just a year on and already we have a further instalment in the franchise in the form of Skate 3. So, without further ado, let's roll!

First impressions of the game suggest that little has changed in terms of the presentation, which from my perspective is a good thing, given that I loved the visual style of Skate 2.

What has changed though is the setting for and trajectory of your character's skateboarding career. The narrative somewhat awkwardly continues from the last instalment and whereas last time you came out of jail and hit the mean streets of New San Vanelona hard, trying to create a career whilst dodging the cops and security guards, now as an established pro, you've moved north to Port Carverton, a place where all is calm and everybody loves skating. What is more, apparently it's time to set up your own label and put together a team.

While it was advertised as being all about team play and a greatly expanded online experience, for me it is the change of scenery and scenario that gives Skate 3 most distinctive element - and I'm just not sure I like it

Although it was annoying to have to escape from guards, avoid disagreeable pedestrians and remove caps from benches and rails in San Van, Skate 2 had an edgy feel that reflected the rebellious aspect of skateboarding.

Even though as a skater I was never into causing wanton damage or pushing the boundaries too far with regard to the law, I revelled in the outsiderness of the culture and its creative, dissenting streak. Skate 3 has veered sharply away from all that, and plants itself (and you) right in the centre of a clean and heavily corporatised world of adoring fans, celebrity friends and above all else the imperative of sales.

As a skater I was never into causing wanton damage or pushing the boundaries too far with regard to the law, I revelled in the outsiderness of the culture and its creative, dissenting streak.

While I like the idea of a progressive, skateboarder friendly city (clearly modelled on somewhere like Portland), I can't help but feel that things have become a little too clinical and mainstream. In this game skating is all about selling product. Every challenge is rewarded with board sales for your company and the number of units you've shifted acts as main progress indicator. You've gone from resenting and running from the evils of Mongo Corp in San Van, to setting up your own corporation, which quickly comes to rule your life.

This aspect of Skate 3 mirrors the uncomfortable slide into the mainstream that skateboarding has undergone over the last decade or so, with many skateboarders now celebrities and CEOs. Cue Jason Lee's super-annoying 'Coach Frank'...

Beyond the narrative changes, the game boasts modest but solid improvements on its predecessor. Not least 'off-board' agility is vastly improved. To me, these blatant changes seem to be the tip of the iceberg of many subtle improvements to the movements and physical reactions of the character, which are now much more universally lifelike.

Also, instead of falling off the board at the first hint of a poor landing or contact with an object, you will now step out of failing tricks without falling and resetting your challenge. While this is only one of several moves away from the exacting demands of the most complex tasks in Skate 2, the changes tend to allow for the deconstruction of challenges into individual elements, which seems something of a shame. Add to this the fact that the 'teleport' weakness of Skate 2 is back with a vengeance - not just allowing, but actively encouraging, you not to bother exploring the city on board, but just to beam yourself from challenge to challenge - and things often feel pretty removed from the realities of skateboarding.

This cleverly adds two tracks to the game allowing newcomers to the franchise to progress rapidly without getting too bogged down.

The almost universally hated SKATE challenges have been scrapped in favour of a more flexible 1UP game. However, the way that the Own and Kill The Spot challenges from Skate 2 have been reworked maintains a high-demand element.

In what is perhaps simultaneously the cleverest and most frustrating element of Skate 3, each any every challenge has now been divided between two strata, having both an 'own' and a 'kill' aspect. To 'own' the challenge and progress through the game you only need to fulfil the basic requirements of a challenge (e.g.. gap into the bank, grind the planter) but to 'kill' it you have to do so performing specific tricks (e.g. backside flip the gap into the bank, nosebluntslide the planter).

This cleverly adds two tracks to the game allowing newcomers to the franchise to progress rapidly without getting too bogged down, but also setting a test for old hands at every stage.

But for me it's frustrating because knowing that the 'kill' option is there means that my Obsessive Compulsive tendencies prevent me from moving on from any challenge before it's stone dead. Add to this the introduction of a 'Hardcore' mode which makes extremely exacting demands of your timing and (very frustratingly) your line, and there is certainly plenty of scope to stretch returning fans.

The team element has certainly brought a new flavour to the mix.

The worst change is the annexing of Hall of Meat into its own mode. Instead of being able to collect the majority of awards through incidental slams and falls, you now have to enter a specific mode to complete any of the set smash-yourself-up tasks. There is only so far you can go with this idea, and I think they'd pretty much got there last time round. I find the way that you have to bounce, fling and jerk yourself around in order to complete the new challenges frankly just a bit weird and dull.

The team element has certainly brought a new flavour to the mix, with your expanding team competing alongside you in certain challenges, whether they be computer controlled or invited online friends.

In the case of the former, the AI is generally pretty strong, but the performance of your team mates can vary drastically with them sometimes winning a team challenge by themselves and other times jeopardising the fruits of your efforts. The added online community aspects, which aim to take full advantage of the ability to share edited footage and self-made skate spots, will no doubt appeal to the younger demographic in particular, although why they haven't mapped the social networking element onto an existing site like Facebook beats me.

Skate 3 is an all-round sharper, cleaner and tidier game.

Skate 3 is an all-round sharper, cleaner and tidier game than Skate 2, but I can't help feel that in losing some its rough edges the franchise has ironed out some of the key elements of the skating experience.

Although I'm personally a bit disappointed by some of the ideological moves the game represents, I'd still recommend it to people who didn't buy Skate 2 on the basis of its smoother and more refined game play. A big question remains, however, as to whether the changes are really enough to justify the spend if you're a Skate 2 owner, especially if Skate 4 is only another 12 months away.

You can support David by buying Skate 3