Other GamePeople columnists have reviewed this from their perspective - huh?:
Race Gamer (Wii)
Motoring Gamer (Wii) 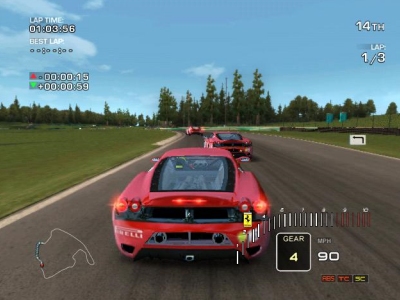 Ferrari Challenge Wii is a promising proposition, but ultimatley it doesn't deliver a genuine racing experience. If it were a car it'd be a Kia Rio. Let me explain.

The Kia Rio is a small, cheap Korean hatchback and although it doesn't look too bad, it doesn't exactly offer what you'd call the cutting edge in driving dynamics and if you got in expecting fun and excitement, you'd soon end up feeling somewhat disappointed. From a distance, the Rio isn't a bad looking little package but get up close and you soon see the rough edges.

It's the same with Ferrari Challenge. To start with, it doesn't look too bad but then you notice some graphical gremlins and glitches that would look out of place on a PS2, so the Maranello gloss and glitz soon fades.

There's all the usual racing modes from a quick race through to a tutorial aimed at perfecting your driving skills through to a full-on Ferrari Challenge season in Italy, Europe or the US. This makes for a nice spread of tracks including the likes of Silverstone and Monza. There's also a Forza-lite paintshop mode that will let you personalise your Ferrari.

Played with the Wii Wheel, Ferrari Challenge's handling is like that of the Kia, lifeless and lacking in feel.

Still, great racing games like great cars are built on handling and not looks, so if Ferrari Challenge can perform on the track we might be able to forgive its lack of looks. Sadly, it's not the case though. Played with the Wii Wheel, Ferrari Challenge's handling is like that of the Kia, lifeless and lacking in feel.

This is a problem with the Wii wheel because, by its very nature, it's unable to offer any feel or feedback because it's not connected to anything. There's a wide range of Racing Wheels that cleverly and accurately provide force feedback, the simple plastic effort of the Wii isn't able to offer any of this.

While this may well be fine for the likes of Mario Kart it can't cut the mustard in a game with any serious interest in claiming to be a simulation. Without the wheel the car will struggle to corner, although bizarrely, you are given the option to gesture and taunt your fellow racers with either your left or right hand depending on which side of the D-pad you press.

Annoyingly, the game also doesn't support the Gamecube controller. Things are marginally better with a Wii-mote and Nun-chuck plugged in but the cars still feel unusually twitchy. With no really strong control mechanic it becomes nigh on impossible to gain a feel for the car, you could be driving just about anything instead of something as special or exciting as a Ferrari.

It's hard to find affection for a game that makes some of the world's most beautiful cars look so unappealing.

The racing itself lacks the essential feeling of excitement found in its rivals, the computer controlled drivers never really afford much of a challenge, leading to pretty dull racing. The damage modelling shows up further graphical gremlins too, and more often than not simply looks odd - and more critically doesn't seem to have any effect on the car's behaviour. The game does an OK job of replicating the glorious sound of the a race-spec Ferrari on song but the rest of the music and sound effects come straight out of a bin labelled Generic.

Ferrari fans might get a buzz out of the car roster but it's hard to find affection for a game that makes some of the world's most beautiful cars look so unappealing. Just like a keen driver wouldn't plump for a Kia Rio, anyone who enjoys simulation racers shouldn't go for Ferrari Challenge. It just doesn't deliver the feel of a real car and that, in a sim, is more important than anything. The Wii is capable of much more than this, the console deserves a truly great racing game with appeal beyond that of Mario Kart. Sadly, this isn't it.


You can support David by buying Ferrari Challenge