Alone in the Dark 360 Review 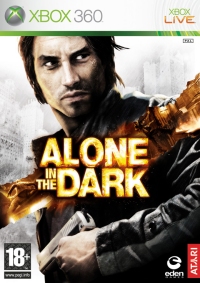 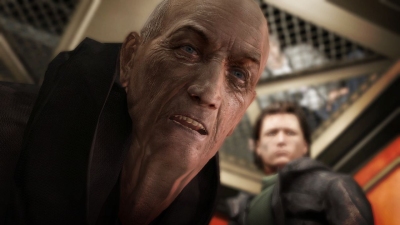 Alone in the Dark 360 has some great, innovative ideas about story-based gaming. Shame it's no fun to play.

Videogames - especially the big-budget, big-name kind - are often accused of playing it safe, of failing to take creative risks. Most of the time it's a fair accusation.

Occasionally, though, a developer takes a risk with a familiar franchise. The 2008 revival of the Alone in the Dark series is a game full of little innovations and experiments with gameplay and storytelling.

Let's start with the little things, like closing your eyes. Hero Edward Carnby will occasionally need to blink to recover from a flash of light or a blast of monster goo to the face, and the player can perform this simple human action by clicking the right stick.

If this wasn't odd enough, at certain points in the game Edward needs to close his eyes and use his spectral vision, looking around with his eyes closed until he sees a ghost standing in the darkness, indicating a clue.

This is a genuinely spooky effect, and it's hard not to jump every time you swing your view through total darkness to catch a glimpse of a silent, pointing spectre.

At every turn, the game tries to make basic game interfaces more physical and immediate. Rather than having a separate inventory screen, Edward will look down into the pockets of his jacket to find and combine items in a first person view.

Healing isn't a one-click process of using a magic medipack, but is a another first person approach whereby Edward looks down at his wounds, spraying or bandaging each one in turn.

It's an odd system, but a very physical one. There are similar situation-specific stick controls for swinging from a rope and other physical activities, which feel closer to wrestling with the real life physics of these situations than most control systems allow.

Alone in the Dark's most prominent innovation isn't part of the gameplay, but rather how the game tells it's story and lets the player influence that telling.

The narrative - a fairly standard survival horror yarn about a demonic infection loose in modern day New York, complete with ancient cults and buried secrets - is broken into episodes, complete with recaps at the start and end credits at the end.

It's a cute gimmick which breaks the story into more manageable slices of action, and which was more recently adopted by Game People's beloved Alan Wake. However, Alone in the Dark goes further than the later game did, by dividing each episode into sequences - and allowing the player to skip forward in the narrative.

Theoretically it's a clever frustration-avoidance device, allowing players to jump over bits of the game that they're stuck on or don't enjoy, and the cinematic recaps at the start of the episode keep the player up to speed on any plot developments they might have skipped past.

In practice I found myself over-using the opportunity to skip to the next sequence because, unfortunately, much of Alone in the Dark is tedious, frustrating and all too tempting to avoid altogether.

It's a cute gimmick which breaks the story into more manageable slices of action,.

I ended up skipping so much that I found I was in danger of not completing the modest number of game sequences required to access the final three sequences of the game.

That wasn't a problem in the end, because I gave up on the game altogether before I hit that barrier.

Why is Alone in the Dark so frustrating?

Partially because a lot of its experimental flourishes just don't work. The elaborate control schemes and interfaces are fuzzily executed and fiddly, with so many variant control schemes for different situations - including skipping between third and first person modes in certain scenarios - that I was left constantly consulting the manual, in between swearing as Edward stumbled drunkenly on-screen.

Combat in particular is an absolute chore. There's a very physical sense of struggle, but it's a wrestling match between player and controller rather than a conflict between the player and the enemy.

Then there's the patchiness of execution, the way that the game can't deliver on its own ambitions. And there are some big ambitions at play here, with scenes of a New York being torn apart by sentient fire that tears skyscrapers apart and opens up vast chasms in the ground.

It's epic stuff, with Central Park as a sinister open-world at the game's core, and occasionally you get a real sense of dramatic scale, standing at the edge of one of an abyss with the city skyline visible over the trees.

There are some bravado blockbuster moments early on as Edward crawls around skyscraper ledges as he tries to escape a burning building, and odd flashes of spooky genius like closing your eyes to see a ghost with your spectral vision.

But elsewhere, and far too often, what should be impressive moments are fumbled or over-scripted. The aforementioned escape from a burning building is heavily choreographed.

Hard to recommend, even as an experimental curio.

A car chase through the city streets should be exhilirating but suffers from terrible controls and, yet again, overly scripted threats that require an exact pattern of responses that said controls make fiendishly hard to execute.

Inconsistency seeps into many aspects of the game - the quality of graphics and animation vary from scene to scene, with moments of high gloss contrasted with shoddy textures and poor animation.

Ultimately this inconsistency of quality, the poor execution of so many potentially interesting gameplay mechanics and ideas, makes Alone in the Dark too much of a chore, crushing any potential fun out of even the more functional sections of the game. It's hard to recommend, even as an experimental curio.

You can support Mark by buying Alone in the Dark