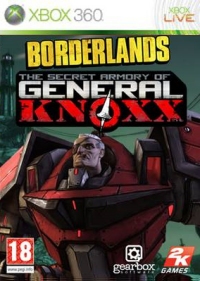 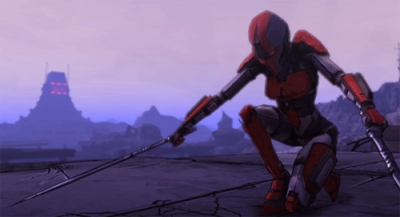 Borderlands: The Secret Armory of General Knoxx 360 is a substantial DLC expansion to Borderlands that refines the game's unique character and sense of humour.

As developers Gearbox have admitted, Borderlands went through a radical creative change during development. Initially envisioned as a relatively serious SF shooter in the aesthetic mould of Fallout 3, a near-rebellion by the art team resulted in a quite different end product: a cartoony, brightly coloured adventure with a wickedly rude sense of humour.

It was a good choice, one that no doubt helped Borderlands become a hit, but the lateness of the creative change is clearly visible in the final game: while the jokes are relatively frequent at the start of the game, they dry up as the original story, a rather bland and self-important narrative about a secret vault which contains oh-what-ever, takes over. The result is a game that can feel confused, torn between irreverent humour and po-faced seriousness.

One of the advantages in Gearbox revisiting the game so quickly with downloadable content is that these new additions are built from the ground-up with that sense of humour at the heart of the action. You can see it the previous two DLC installments: The Zombie Island of Dr Ned, which pastiched survival horror games and cheap expansion packs to great effect, and the arena-based grind of Mad Moxxi's Underdome Riot, with its demented, vampish lead character.

The Secret Armory of General Knoxx is the first extension of Borderlands' main storyline, adding huge new stretches of desert and roadway to explore.

After those two diversions, The Secret Armory of General Knoxx is the first extension of Borderlands' main storyline, adding huge new stretches of desert and roadway to explore, and bringing back corporate army the Crimson Lance, now under the command of the titular Knoxx. Knoxx has been sent to kill the vault hunters, and has the army, and indeed the armory, to do it.

While there's still plenty of gunplay and gun collecting to be done, and the tough new enemies are no laughing matter, Secret Armory expands on the humour and off-beat characterisation of the main game. Old favourites are back, including Scooter ('get you one!'), his mother Moxxi and local arms dealer Marcus Kincaid, although there's a disappointing lack of novelty Claptraps this time around.

The new characters are also really good fun, and far more distinctive than most of the bosses from the original game. There's Mr Shanks, the well-spoken king-convict who rules the nearest jail, and who wants to correct certain rumours about himself.

Your ally Athena is dull and over-earnest, but there's a great gag where all her messages come to you disguised as spam adverts for, well, exactly the kind of products advertised in spam emails.

Knoxx's world-weary tone and laconic delivery are about as far away from the usual game-villain histrionics as you can get.

Best of all though is General Knoxx himself. From his first message to the vault hunters, Knoxx makes it clear that he doesn't like Pandora, he doesn't like them, and he's bored of the whole business already. Knoxx's world-weary tone and laconic delivery are about as far away from the usual game-villain histrionics as you can get, and are a real highlight.

Borderlands is developing a really strong supporting cast, and hopefully any full sequel will allow more interaction with them. At the moment, there are rare cut scenes, but most of the dialogue is delivered via incoming voice messages, triggered at various points in the game. These are more frequent and funnier in Secret Armory than they were in the main game, but it would be nice if there were some prompt to trigger further dialogue, for those who want it.

Borderlands increasing refusal to take itself remotely seriously just adds to the fun.

There's still a certain amount of straightforward Sci-Fi in Borderlands, but with every successive expansion of the game, the level of offbeat humour gets greater. The Secret Armory of General Knoxx is full of offbeat touches, from the absurd tourist attraction in the desert, to the laugh-out-loud shock value of incredibly lethal midgets hiding in loot boxes, to the deadpan mission descriptions ('You. Will. Die.').

Borderlands increasing refusal to take itself remotely seriously just adds to the fun, and the Secret Armory of General Knoxx is a challenging, hilarious extension to the main game. Get you one.

You can support Mark by buying Borderlands Armory of General Knoxx