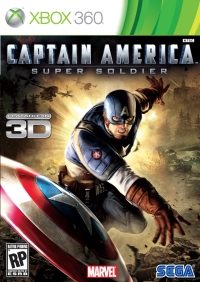 Other GamePeople columnists have reviewed this from their perspective - huh?:
Teen Gamer (360)
Reporting Gamer (360) 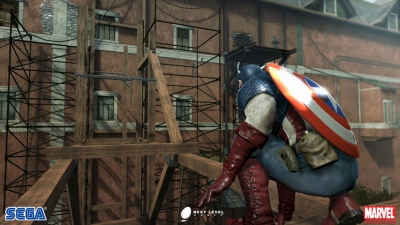 It's not hard to see where Next Level Games got the inspiration for Captain America: Super Soldier. While the visuals and storyline draw from the Captain America movie, and the comics that inspired that, the gameplay draws deeply from a single well: Rocksteady's phenomenally successful and critically acclaimed Batman game, Arkham Asylum.

Well, steal from the best, and all that, especially when no-one else has bothered to clone it. In a market stuffed with World War II shooters and sub-Nintendo-platformers we could do with a few more games like Arkham Asylum, even if they're relatively derivative cash-ins.

After all, Arkham Asylum isn't just the best super hero game ever made, itpretty much single-handedly flipped the expectations of what a licensed game, especially one drawn from a comic book source, could be like. It mayhave been a tie-in, but it was also a glossy, deep and superbly polished experience.

Well, Captain America: Super Soldier isn't up to those standards, and in many aspects reverts to older movie tie-in expectations, with the sense that corners have been, if not cut for budgetary reasons, then smoothed down sothat the game could be delivered to deadline and still function.

It's a bit short, and cheap and cheerful in places, but it's still very much rooted in the formula that made Arkham such a successful transfer of the superhero genre into videogames: bombastically athletic movement and combat, in an atmospheric and self-contained environment.

That environment is Castle Zemo, a sprawling medieval fortress in the Bavarian mountains converted to house a hidden military complex run by Hydra, the Red Skull's rogue Nazi science division turned private army. Hydra scientist Arnim Zola is using the castle for research that threatens to change the course of World War II, and Steve Rogers, the former weakling who became patriotic hero Captain America after taking the experimental super soldier serum, needs to get in there and stop him.

While Zola is a character in the Captain America movie, that the castle is Baron Zemo's old gaffe is the first of many elements from the comics imported in to the movie's continuity for the game. While Helmut Zemohimself doesn't appear, his artefacts litter the castle and open up diary entries which tell the recent history of the place, similar to the diaries found lying around the corridors of, yes, Arkham Asylum.

If it's not obvious already, this is very much the comicbook version of World War II.

There are plenty of other nods to the comics, with Zola getting to act alot closer to his comic book incarnation, and villainous support coming in the form of Madame Hydra, Baron Von Strucker and Iron Cross, all given a bit of a makeover to fit them within the movie version of the Marvel universe. The movies have a different feel and aesthetic to the comics, more textured and down-to-earth, and the villains brought in from the comics are blended into the Marvel movie-verse well, striking the right balance between fantasy and reality.

These bosses are supplemented by various classes of Hydra troops, all of which have stylised uniforms and many of which are augmented by fantastical technology.

If it's not obvious already, this is very much the comic book version of World War II, where outlandish secret weapons are wielded against the allies and ancient evils are unearthed in the foundations of crumbling castles. Asthe action is a step removed from the real war, it feels a little more acceptable than just mixing fantasy tech with real life atrocities, whileretaining a period, pulpy feel.

There's not much to the central narrative of Captain America: Super Soldier - just a bunch of bad guys and a base full of weapons to be destroyed - but that simplicity fits well with the pulp ethos, which leaned towards strings of action set pieces rather than complex plots.

Although character interaction is largely restricted to cut-scenes - non-player characters other than enemies are rare - all the required beats for a flag-waving fantasy are here, from square-jawed bravery on the part of Cap and his buddies to the leering female villain subjecting our hero to a bit of light torture. The very idea of an ancient castle hiding a gleaming secret base is pure Saturday morning serial material.

It isn't much use building a grounded superhero universe without allowing the player to feel super heroic, and gameplay is based firmly on two uses of Captain America's super soldier abilities, combat and parkour-type exploration.

The combat is loose, free-flowing and hectic, with Cap set upon by several enemies at once and moving between opponents quickly to beat themback with chains of simple attacks, blocks and counters. Cap is suitably athletic, jumping over the heads of enemies or rolling to dodge bullets, andwhile it isn't a complex system, and certainly doesn't require the reactiontimes of Assassin's Creed, it does feel amped up and superheroic.

Various finishers are available, including punching out cold a downed enemy, knocking one out with a brutally strong attack, and turning their weapon against them. Most of these attacks triggers a close-up, slow-moanimation, giving the satisfying spectacle of Cap punching a bad guy so hardhis helmet shatters. It's moments like this that made me feel I was really playing a superhero, embedded in a comic book narrative.

More troublingly, there's a sort of efficient blandnessto the game.

More straight forward still is the platforming, which sees Cap swinging on pipes, wall-running, and doing all that Prince of Persia/Assassin's Creed type urban exploration stuff. Surprisingly, all these moves are performed with one button, so providing you've moved any obstacles out of the way and run in the right direction its very simple to tap the A button on cue to bound, swing and leap around the environments. The game rewards perfect timing, but with Cap largely incapable of walking off a ledge he isn't supposed to, the system does feel too assisted even by modern gaming standards - it's fun to be part of this kind of athleticism, but it doesn't feel like the player is contributing much.

Of course, aside from his super soldier serum enhanced body - and his patriotic spirit - Cap's main weapon against evil-doers is his invulnerable shield, and the game knits the shield's use tightly into gameplay, using it as both a ranged weapon and for defensive blocks in melee, as well as for more precision moves like deflecting a bullet straight back at a sniper. The shield boomerangs back into Cap's grip after being thrown, so there's great satisfaction in ricocheting the shield around a group of enemies, then catching it automatically before piling in to beat up those newly-stunnedfoes.

As the game progresses and Cap levels up by collecting intelligenc epoints, new abilities are opened up, increasing the efficacy of counters and allowing the shield to be used in more interesting ways. Intelligence is gathered through smart fighting, well-timed jumps and by collecting various Easter eggs around the castle including Hydra files, Zemo's antiquities and Zola's film diaries. That the latter two add a strand of extra narrative to the story provides a completism-encouraging depth to the game world, with the flickering news reel visuals of Zola's home movies reinforcing the period setting.

So... Cap feels like Cap to play, the story (by comics writer ChristosGage) fits with the movie continuity while bringing in favourite elements from the comics, the game as a whole is based on the most successful superhero game ever. At this point you might be wondering if anything, bar a lack of production polish, is actually wrong with this game.

Well, to put it generously Captain America: Super Soldier is focused and accessible. To put it less generously, it's quite easy and fairly short, certainly for a full-priced boxed release. Even a ten-thumbed incompetent like myself was able to complete the main game, find all the Easter eggs, and get every achievement by playing a few hours a day for less than a week.Assassin's Creed: Brotherhood this is not.

I want to smack Nazi robots in the chops then leap outof a window.

However, there is a certain satisfaction in being able to drain all the juice from a game, so if you're a time-limited, cash-rich gamer this might not be a problem. There's pleasure to be had in getting something done with a week of gaming rather than having to spend months exploring every corner of a title.

Perhaps more troublingly, there's a sort of efficient blandness to the game's aesthetics. The voice work is all good, from a mix of the movie's performers and good soundalikes, and the script is briskly efficient, but you'll be hard pushed to pick out any great lines of dialogue, even if the underlying story is tremendous, pulpy fun. The graphics are also a bit too shiny and clean, without much in the way of atmospheric lighting. Castle Zemo looks authentic enough, but it lacks the sinister ambience that would make the game really immersive.

Still, in spite of these flaws, I couldn't help but love Captain America:Super Soldier. One of the first comics I ever had was the black and white Marvel UK Captain America weekly (short lived, as you might expect for a newsstand title about another country's patriotic hero) and, as amid-thirties parent, spending my free time running around a castle as a superhero, smacking villains about and searching out hidden treasures, is exactly the kind of boyish fantasy I want in my life.

Although it's damaging to any shred of games writer credibility I might have ever accrued, I have to admit to enjoying a slightly second-rate third-person actioner like this far more than I do any number of more polished, family friendly and achingly tasteful game experiences in the Zelda or Mario mould. Keep your little mushroom people, I want to smack Nazi robots in the chops then leap out of a window.

It isn't sophisticated, or complex, or a nuanced example of games design, but if you love Captain America and think there aren't enough games like Arkham Asylum out there, you might want to search out Captain America: SuperSoldier, especially once the price drops. There's a good few hours of superheroic fun to be had here, and if you liked the movie this is definitely an enjoyable expansion of the film's story.

You can support Mark by buying Captain America: Super Soldier