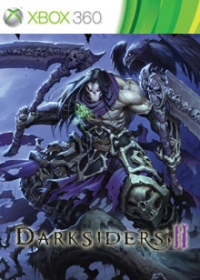 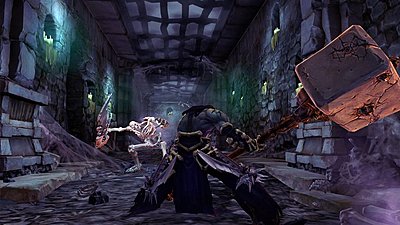 Darksiders II 360 is a slick, entertaining adventure set in an interesting world which takes far too long to get where it's going. 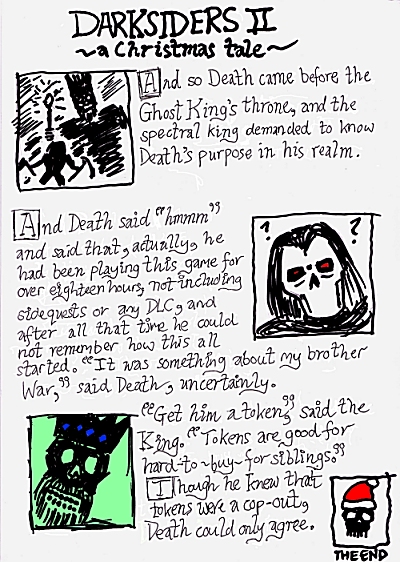 My apologies for that. I have these moments of madness.

It's not like Darksiders II is a bad game. Far from it. It's engaging, well-made and has depths that keep it involving beyond the basic visceral thrill of combat. It is a good game.

But, by Death's flowing heavy metal hair, it doesn't half drag on a bit to the point where, as the little badly scribbled story above indicates, it's easy to forget how the whole thing started and what the point is supposed to be.

It doesn't help that the basis of the storyline is rooted in the series' own mythology, and actually overlaps with the events of the first Darksiders. In this sequel you're playing Death, horseman of the apocalypse, who is trying to get his brother War off the hook for destroying humanity (apparently).

We don't get to see humanity, by the way, so while we can all agree that destroying the human race is, you know, a bad thing, as a plot point in Darksiders II it's fairly abstract. Instead, Death wanders around various fantastical realms and netherworlds meeting supernatural beings with quite a pleasing range of personalities, from bombastically pompous to amusingly flippant.

The voice acting is very good, and it's a pleasure in particular to hear an actor of the calibre of James Cosmo bringing gravitas and charm to his role, adding warmth and humour to the potentially bleak storyline.

(There isn't actually a Ghost King, by the way, but the land of the afterlife does have a lot of skeletal lords and other worthies, which is part of the problem, really.)

The mainstay of the gameplay is combat. The realms Death travels around are infected with sticky, awful corruption, which turns creatures and machines bad and needs a good kicking. There are also sundry bosses and baddies that need a hearty slap too, which Death delivers with twin scythes, a secondary weapon of your choice, a pistol and an absolute ton of magical powers.

All of these, barring the gun, can be replaced and upgraded throughout the adventure, a light RPG element which adds a lot of depth. There are goodies to collect and trade in with merchants, and secrets to be found. A lot of time can be happily wasted just swapping Death's cloak around, or powering up a possessed weapon by 'sacrificing' unwanted items to it.

Thankfully, while the object system has nuance the combat blissfully does not, and while there are tricks and tactics required for some of the - painfully annoying - bosses most of the combat is straightforward button-mashy fun, with the special powers ensuring some variety to each violent encounter on your journey.

It's a spectacular journey, too. If there's a star of the show it's comics artist Joe Madureira, whose comics art I've never really warmed to but who brings a tremendous scale and style to this world. The general aesthetic could perhaps be described as 'What if Jack Kirby was really, really into heavy metal?', with old school Marvel Comics style fantasy welded to a heavy metal excess of flowing black hair, giant metallic weaponry and the like.

It all looks fantastic, and truly beautiful in places, with epic fantasy landscapes peppered with giant stone robots, flowing waterfalls and crumbling, towering statues of long forgotten warriors. It's a world of ruined splendour, where nothing is new and everything sits on the edge of extinction.

There's a lot to do here, too. The environments are sprawlig the missions are long, there's plenty of side-missions, loot and secrets to discover. There's even DLC, should you somehow run out of things to do.

Not that many people will. In fact, I suspect many people won't complete Darksiders II's main storyline, which just goes on too damn long with too many fetch quests, diversions and grinding battles with repetitive foes. It's good to have a lot of content, but in this case it feels like more of it could have been made optional, leaving a cleaner through line for players just wanting to blast through the adventure to follow.

Instead, there are longeurs, and ridiculously elaborate diversions where one character sends you to gather three characters who in turn want you to seek out some lost souls who... and before you know it its four hours later and you can't remember what you were sent to do in the first place.

Depth is good, but sometimes less really is more.

It just feels like a bit too much, and that regardless of the twists to the combat and new abilities the game keeps throwing in, the central oblique story and fantasy setting, however epic, isn't enough to justify that level of attention and time commitment. It got to the point where I was given new abilities and I actively resented having a new power to learn, as I just wanted to mash my way to the end.

Depth is good, but sometimes less really is more, and it would be nice if a game's less essential diversions were tucked away as optional sidequests than locked into the main plot.

If you want to go deep on Darksiders II's plot and combat system, and have the time to do so, then you'll get a lot out of it. For many of us, though, I suspect this is actually too much game to fit in.

And from Death, me and all the folks at Game People, Merry Christmas.

You can support Mark by buying Darksiders II