How To Train Your Dragon 360 Review

How To Train Your Dragon 360 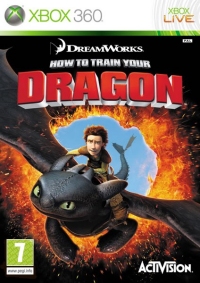 How To Train Your Dragon 360 does what it says on the tin: you train dragons. Unfortunately, you don't get to do much else, which leads to a lot of back-tracking, resource gathering and basic combat.

Out in the real world, blood sports are generally disapproved of these days, and are certainly not considered family fun. Take a primary school class on an educational trip to a cock fight in the back room of an East London pub and you'll end up with a stern letter from the PTA afterwards.

However, the noble art of training previously placid animals to tear each others throats out for human entertainment lives on, in videogame la la land. Pokemon started the trend, but there have been plenty of clones since, all of which play with the basic elements of feeding, nurturing and training virtual pets to fight each other in arena battles.

How To Train Your Dragon is, as a property, a superficially good fit for this odd little sub-genre of game, although I'm not sure that the film's message of Vikings and dragons getting along would necessarily lead to the dragons fighting each other for the Vikings' entertainment, but there you go.

However, with the basics of Viking/dragon society established at the start of the game, there's no arc for the game's story to go through, only a series of tournaments. Both the film and the book it's based on are coming of age stories, but there's no moral or learning to the game: instead you get a dragon, customise it, get some more dragons, and advance through contests until you've won. It's a hollow story, victory for victory's sake.

Worse than that, there's no relationship developing between you and your dragons. I unlocked all the customisations through the first few rounds of combat training for each dragon, and changed the look of each dragon to something I liked, but once all that fiddly stuff was done, nothing changed beyond the boosting of each dragon's attacks through levelling up. There was no relationship between me and the dragons - apart from a nomnom effect when I fed them, they didn't respond to me at all.

The noble art of training previously placid animals to tear each others throats out for human entertainment lives on, in videogame la la land.

So much for the friendship between a boy or girl and his/her dragon.

Without that relationship, the game falls into a pattern of dragon training and dragon fighting.

The former involves running back and forth across the game world to complete certain tasks, while dropping into the Training and Challenge areas to learn combat moves and complete challenge mini-games, both of which provide XP and allow you to level up.

Bizarrely, experiencing actual combat doesn't lead to XP: to control your levelling, XP is only gained when you get a medal in a challenge, or when you complete a training level. You can go back and do these again, but once you've got the highest level reward, that's all the XP you're getting.

To be honest, I didn't want to go back as much as I had to. Levelling up four dragons meant going through the same training exercises (defeating dragons using specific button combos on four different difficulty levels) and challenge games four times, which was more than enough. Some of the challenge mini-games are initially fun, especially the sheep-catching one, but soon pall after repeating on three difficulty levels for each dragon.

It's all terribly repetitive. Unfortunately, outside the training and challenge arenas there was more tedious busywork for me, as I was required to run around pulling up plants, turning over stones, and catching chickens to feed/heal my dragons whenever they began to get exhausted.

And then, finally, there are the tournaments themselves. As the game goes on, you have to fight more competitors with more dragons to win each competition.

In theory, that should add diversity. In reality, there are few dragons that can't be defeated sooner or later with a combination of stun moves followed by fire blasting your dazed opponent. Later matches require a little more use of block moves, but mostly its button mash central.

The slo-mo finishing moves are suitably splashy and epic, but feel hollow when the fights themselves are such a drag.

Those splashy fight effects are just one aspect of a generally polished game which has lovely graphics, great music and decent voice acting. How To Train Your Dragon is a nicely produced game, but the problem is there's no soul or depth beneath the hood beyond the depths of repetition required to win through to the next bit.

Beyond an initial stage of opening up options, it locks up into a static world.

The Viking village and its environs are beautifully animated, but it's a shallow world that's almost entirely open from 10% into the game, then never changes after that. The voice acting is OK, but the dialogue is sparse and loops very quickly, not good in a game where you do the same things again and again.

Good stories are about change and good games are about advancement. How To Train Your Dragon provides neither of these things: beyond an initial stage of opening up options, it locks up into a static world where nothing ever changes beyond the trophies on your shelf. Beneath the glossy surface it's a charmless, repetitive affair.

You can support Mark by buying How To Train Your Dragon