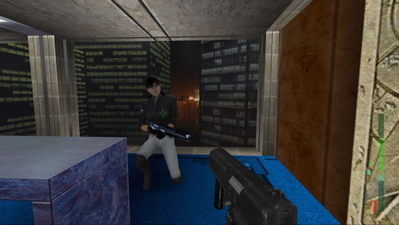 Perfect Dark 360 is a futuristic period piece, a remake of a game set in 2023 and originally released on the Nintendo 64 in 2000. As a great example of how to remake a game, this vintage shooter is as enjoyable for its crisp retro style as it is for its Sci-Spy action.

Rare's GoldenEye game for N64 was a licensed game so successful that it justified a follow-up that was in all senses a sequel - except for no longer carrying the James Bond licence.

It's this sci-fi twist that makes Perfect Dark a distinct property in itself, and gives its storytelling a specific flavour - part hard-nosed SF, but also something more tongue-in-cheek. Beneath the lasers and aliens, a Bondian humour remains.

James Bond is a hard act to follow, and swapping one of the most iconic characters in 20th century fiction for a new creation is a big ask at the best of times. Joanna Dark is OK, but her clipped English accent makes her little more than Lara Croft with shorter hair. For once, an American accent would have made for a more distinctive character.

This is a first person shooter of course, and in an FPS it's what's on the outside that counts: thankfully the world of Perfect Dark is crisp and colourful in a way that actively benefits from the update to 360. Every model in the game has been rebuilt from the original textures (with the odd replacement to remove Nintendo-specific in-jokes), and then optimised for the new hardware.

Perfect Dark prospers because its futuristic aesthetic works because of its clarity, not its attention to detail.

The end result is that the futuristic world of Perfect Dark is crisp and fluid in a way that would have been impossible on N64, and is very hard to achieve with contemporary-standard graphics. The simplicity of Perfect Dark's visuals means that it doesn't jaggy or slow-down - the level of detail may be crude compared to modern games, but the fluidity of motion and sharpness of each line is outstanding.

It's hard to imagine this working quite as well with GoldenEye, or any other 'real-world' game from the best part of a decade ago. Perfect Dark prospers because its futuristic aesthetic works because of its clarity, not its attention to detail. The neon-lit skyscrapers and holographic shields of Jo Dark's world don't need extra texture: their simplicity has a cartoon charm all of its own.

much as the classic shooter mechanics have aged, Perfect Dark perseveres because the storytelling decisions made to distance it from Bond put it in a genre that allowed the invention of the developers to bloom, and encouraged an aesthetic approach that is relatively timeless.

Perfect Dark's world of SF espionage is still worth exploring today, especially in this souped up incarnation.

Perfect Dark makes a great case for the longevity of well-designed style over clunky attempts at realism, and for remakes that are neither straight ports nor modernisations, but instead optimise the original game for current technology.

Its enemy AI may be simple and its gameplay challenging by modern standards, but Perfect Dark's world of SF espionage is still worth exploring today, especially in this souped up incarnation.

You can support Mark by buying Perfect Dark