Shadows of the Damned 360 Review

Shadows of the Damned 360 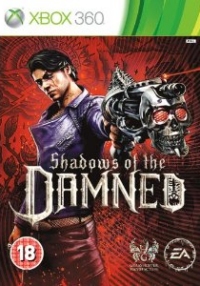 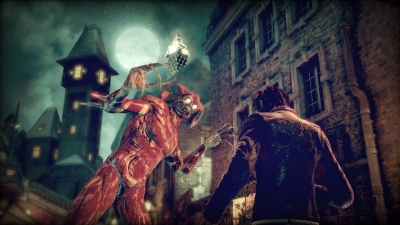 Shadows of the Damned 360 is a horror shooter filled with over the top violence and crude innuendo. Beneath the bluster though, there lies some surprising subtleties.

The obvious joke to make about Shadows of the Damned would be that any warnings about mature content are incorrect, because what it's actually loaded with is immature content. While in no way suitable for kids, a lot of Shadows of the Damned isn't really very adult either, instead taking an adolescent glee in references to sex and bodily functions.

The player character may be purple-jacketed demon hunter Garcia Hotspur (surely the best name for a videogame character ever), a surly bad ass blasting his way through hell to take revenge on the devil who took his girlfriend, but the real star of the show is Johnson, Hotspur's demonic pal.

Johnson is a floating skull who can turn into a motorbike (although only in cut scenes, so thankfully we're spared an unnecessary and awkward vehicle section) and a variety of weapons. The main pistol Johnson can transform into fires demon bones, and is called, well, the boner. The boner can be upgraded into a hot boner, and even a hugely-barrelled big boner. As Johnson himself says as he transforms into the big boner, 'sch-sch-schwing!'

It's all very childish, and utterly weird, as is Johnson's distant relative, a small batwinged demon who drops a flaming demonic poop to indicate Garcia has reached a save point. The part of hell that Garcia enters in search of Fleming, the demon who took Paula from him, has a few other memorable, crazy features. Bubbling darkness can be dispelled by using Johnson's light shot to blast a goat's head on the wall. Doors are locked with baby-like demon faces that want to be fed strawberries, eyeballs or brains to allow entry, and which giggle happily once sated.

Reading these headline-worthy aspects of Shadows of the Damned, you might be forgiven for thinking you have a handle on the tone of the game: a grindhouse schlockfest, with overtones of Ghost Rider's leather clad demonology and the gonzo logic of the wilder Japanese horror films.

Shadows of the Damned isn't really very adult either, instead taking an adolescent glee in bodily functions.

And after the first couple of hours play, you might think you know the kind of game it is as well. Shadows closely resembles Creative Producer Shinji Mikami's earlier title Resident Evil 4, in that it's a third person horror shooter with a distinctly Spanish flavour. Controlling Garcia from a similar over-the-shoulder perspective, using Johnson's weapon forms to obliterate demons in the streets of a Demon Town that has a similar rickety European look to the villages of Resi 4, it all feels very familiar.

If anything, Shadows feels simplified compared to the earlier game, which was already considered a dumbing down of the Resident Evil series in some quarters (although not by me - far, far more on Resident Evil 4 when it gets an HD reissue later this year). As the basics of Garcia's skills and weapons are gradually rolled out, along with the mechanics of the demon world around him, it all feels very straightforward, a frantic but simple exercise in demon blasting.

Demon Town also feels like a very shallow environment, prettily executed but largely deserted and with very few opportunities for interaction. At times in those early sections it feels like a backdrop, each street a straightforward tunnel for Garcia to run down as he exchanges quips with Johnson and blows away a few demons as he goes.

In spite of looking like a current generation horror game, Shadows feels rooted in the older, simpler gameplay of the Ghosts 'n' Goblins games, where the single objective was to fight onwards and upwards against waves of nasties. The side-scrolling version of Garcia in the game's loading screens feels like an homage to those ruinously tough old platform horrors.

But just as I thought I had Shadows of the Damned pegged it began to reveal previously hidden depths.

But then, just as I thought I had Shadows of the Damned pegged as a shallow, fun gorefest runaround - Splatterhouse with guns instead of melee weapons, perhaps - it began to reveal previously hidden depths. As extra twists on what can be done with weapons are introduced, and the ways that light and dark effect the environment are explained further, the game becomes much more challenging and involving, the frantic shootouts interacting with environmental puzzles to require both quick thinking and trigger fingers from the player.

To my surprise, I found that Shadows of the Damned was far from dumb after all, and had in fact been giving me a gentle, slow burn introduction to a quite complex series of game systems, easing me into its mechanics and world over the first couple of hours of play.

The main source of complexity is the darkness that bubbles out across the landscape at various points, and the light that dispels it. Initially this is just a threat - when Garcia is trapped in darkness, his life is in danger, so any dark area needs cleaning out with light or escaping at speed. However certain hotspots, either weaknesses on enemies or Cores in the environment locking doors, can only be shot from within the darkness. The threat of the dark and the need to use it for certain objectives create some tense moments of high-speed decision making.

Setting a game in Hell allows for major reality shifts as well as throwaway lunacy like the strawberry-eating baby doors, and later acts take full advantage of the potential to throw curveballs at the player. This can be infuriating, as having developed some skill with the core mechanics you're suddenly required to do something completely different, but there's an underlying balance that these variations from the core gameplay can always be overcome with persistence and luck, no matter how impassable an insta-death chase scene or other frustrating set-piece might seem.

As the gameplay shows its subtler side, so do the story and characters.

For every nightmarish scenario there is a solution or tactic to get through, and regular save points and well-paced levels mean no grinding challenge drags on too long.

As the gameplay shows its subtler side, so do the story and characters, revealing something deeper than the abrasive surface of guns, gore and swears. Although Johnson is in many ways a tool of Garcia's demon-hunting trade, their relationship is quite a fond friendship, with a little bickering but none of the boilerplate character tension that characterises a lot of tough guy/sidekick relationships.

Johnson is a great, scene-stealing character, with some lovely offbeat lines and observations. While Garcia is angry and driven, Johnson is an amiable, chatty fellow. At one point, Garcia spits that the area they're in is 'hot as hell', and Johnson charmingly observes that yes, it is, 'but it's a dry heat', as if recommending a holiday destination. It's an excellent line delivery from Greg Ellis in a game full of well-judged vocal performances.

Johnson is a great, scene-stealing character, with some lovely offbeat lines and observations.

Although Johnson gets all the best lines, there's more to Garcia himself than initially meets the eye. The innuendo and sexual references become part of Garcia's quest, as his journey through hell takes him back through his relationship with Paula, through intimacy, anger and passion. It's a complex relationship, but romantic at the core, Garcia's finer feelings driving him through worlds of temptation and menace.

There's a lot of big hard weaponry in Shadows of the Damned, but a soft heart that beats beneath. It's that heart and creative spirit that makes a game that's exciting, surprising - and sometimes extremely irritating - so engaging. It may be rude and rough around the edges, but Shadows of the Damned is also a lovable horror romp, and in its own insane way a game to cherish.

You can support Mark by buying Shadows of the Damned