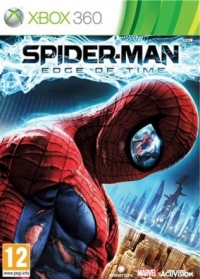 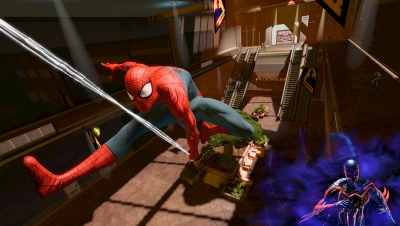 Spider-Man: Edge of Time 360 is a rare videogame that works better as an authentic Spider-Man story than it does as a game.

Sequel Edge of Time arrives only a year later, and it's instantly apparent that the rapid turnaround has resulted in some corners being cut, with a 50 per cent reduction in the number of Spider-Men playable in the game.

I'm - sort of - joking, as there are good story reasons for the game to feature only the Amazing (i.e. normal comic book continuity) Spider-Man and his near-future successor, the Spider-Man of 2099, but in lots of other ways the game does feel like it's being conservative in its ambitions so as to produce a stable, professional game to a tight deadline.

It opens cinematically enough, with Spider-Man 2099 stalking crazed scientist Walker Sloan through the headquarters of future mega-corporation, Alchemax. As Spidey 2099 crawls through air ducts and the like, the game's credits appear over elegantly framed shots of the very, very shiny building.

It's all well presented, with very good voice acting, decent character animations and sharp dialogue from comic book writer Peter David, who has always had a gift for writing around the complex continuity requirements of superhero comics and unsurprisingly proves a natural fit for writing within the strictures imposed by gameplay.

Peter is still Spidey, but now works for Alchemax rather than the Daily Bugle, and only finds out that something is wrong with time when Spidey 2099 tells him - via psychic quantum link - that he (Spidey 2099) has has a vision of Spidey 2011 dying at the hands of Anti-Venom.

Of course, when Anti-Venom turns up in 2011 and starts wrecking the joint, our friendly neighborhood Spider-Man isn't going to think of his own safety, hide and leave Anti-Venom to endanger innocents in is rampage, is he?

That's a great hook for a story, the lead character running towards his own demise with only a man in the future trying to save him, and it acts as a starting point for a time travel tale that bounces from one deadline to another as time is rewritten, quantum causality allowing events in the present to impact on the future.

If one Spidey destroys a hibernation capsule in the present, whatever crawled out of that capsule in 2099 disappears (Ed: Sounds like Ocarina Spidey?). Alter the building schematics in the present, and a convenient air duct appears in 2099.

As a game this plays out as what might be called a single-player co-op game, where one player controls two characters to solve a problem with their different abilities. Older readers may remember similar systems being used in Resident Evil Zero or, going way back, Head Over Heels, although in this case the alternation between the two Spideys is entirely predetermined, so there's no strategy to it.

Step back from the paradoxes and breathless chatter and the game is a lot more straightforward.

In fact, beyond picking and choosing which powers to level up, there are precious few decisions to be made in Edge of Time. The action is entirely confined to the Alchemax tower, and the overlapping narratives require the player to be funnelled through it in a linear manner to hit the next set piece. After the freedom of movement allowed by Arkham City, it all feels very constrained.

There's a clever bit of narrative sleight of hand here that helps conceal those constraints though. The time travel plot line gives the story, and by extension the game, a sense of scope and complexity, juggling two time zones and protagonists along with the various threats and baddies the two Spideys need to deal with. It feels like a big deal in story terms, with a lot going on and the fate of all causality at stake.

Step back from the paradoxes and breathless chatter of the two lead characters, however, and the game is a lot more straightforward, set entirely within a single (albeit large) building and leading the player through one fight or chase to the next. The hectic bouncing around the time line partially conceals the extent to which Edge of Time is just a linear brawler with some simple environmental puzzles along the way.

There's only so far that narrative tricks can disguise a lack of variety, and in spite of the odd stand-out interior - a lush arbotoreum, a grand hall with fascistic central statue - the Alchemax tower became an over-familiar environment as I played the game, regardless of what time zone I was in. While there are cosmetic differences between 2011 and 2099 - the latter has more brushed metal surfaces - the two Spideys are still stuck in a big office block, without the freedom to explore either contemporary or future New York.

The glimpses of the epic future New York are suitably impressive.

In keeping Spidey indoors and off the streets, Edge of Time takes the character out of his natural urban context, and deprives the player of the exhiliration of swinging between buildings, a key part of the Spider-Man experience. The web-swinging mechanic is executed well, but it feels weird only getting to swing around inside, the polished, formal environments skewing the game towards the 2099 incarnation of Spidey rather than the world of the contemporary Spider-Man, which is after all the world most of us want to play in.

Combat is also sound in terms of controls, acrobatic and hectic, while lacking something in terms of context and erring towards the futuristic. In both time zones the baddies are mainly security guards and robots rather than the thugs and criminals the Amazing Spider-Man usually gets to beat up on, and feels a little sterile because of it, with Spidey's in-combat quips wasted on such dull opponents. Only in boss battles with Anti-Venom et al did I feel I was taking part in a proper Spider-Man fight scene.

This is not to say the 2099 Spidey and his world are entirely without merit. The glimpses we get of the epic scale of future New York are suitably impressive, although it doesn't help that we mostly get to feel the true scale of the Alchemax building through awful, awful vertical free fall sequences. These sections, where Spidey 2099 needs to be steered away from obstacles as he drops through shafts in the building, are tedious exercises in twitch reactions and rote learning routes, with only a set-piece lift chase creating adrenaline rather than annoyance.

In spite of all the constraints, the lack of ambition and the repetition, Edge of Time certainly isn't a complete right-off. By keeping their plans for the game unambitious, developer Beenox have instead produced a game that's very solidly built, an efficient piece of work if not an inspired one. There are also plenty of extras and unlockables for enthusiasts willing to put in the hours.

The game's real strengths, certainly for Spider-Man fans, are in the scripting and performances. The banter between the two Spider-Men is great, a proper chalk and cheese buddy double act, and with the exception of a comatose-sounding Val Kilmer as Sloan the voice acting is consistently good. While it may not hit many Spidey wish-fulfillment buttons in terms of in-game action, the story does challenge the character of Peter Parker in an interesting way, and do fun things with some of his villains and mythos, and the use of time travel is smartly thought through.

In other words, if Edge of Time were a comic rather than a game I'd be giving it a much heartier recommendation. It may not be a fantastic game, but Edge of Time is a pretty decent Spidey story, well told.

You can support Mark by buying Spider-Man Edge of Time