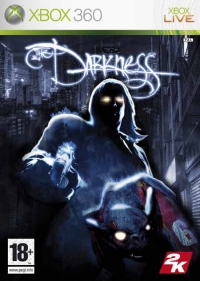 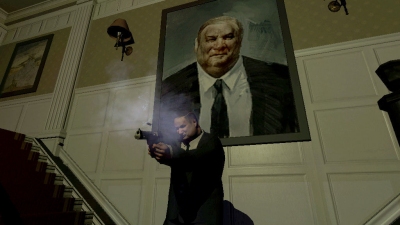 The Darkness 360 puts a supernatural spin on a familiar story of gangland revenge.With a sequel just released, now is a good time to revisit 2007 shooter The Darkness.

While five years has left Starbreeze's game looking a little worn and dated, the mix of genres at play within The Darkness - gangland thriller, supernatural horror and the more violent end of the superhero genre - still manages to throw up some surprises to a contemporary player.

The basic premise of The Darkness sticks closely to that of the Top Cow comic on which it is based, with mobster Jackie Estacado inheriting the power of the Darkness, an elemental force that can be used directly against enemies as well as to generate gremlin-like Darklings, and using that power to wreck vengeance on the mob boss who has wronged him.

Beyond that, the game adapts the material to suit the medium, and the intent of the game, in the same way that you might expect a movie to diverge from its comic book origins. So, out goes Jackie's ornate costume of Darkness-based armour, and in comes sweary, hard boiled dialogue befitting an adult-oriented shooter.

The game's approach to its fantasy and horror elements is to increase their impact by grounding virtually everything else about the game as firmly in the real world as possible. The Darkness mostly takes place across a handful of grubbily portrayed districts of New York, accessed via a couple of Metro stations.

The use of the Metro creates an interesting contrast that sets the Darkness apart from many other games: whereas often descending beneath the ground equals danger, here its the night time streets above that are a playground for both Jackie's powers and the goons trying to kill him, whereas the Metro is a well-lit, violence-free hub where Jackie can talk to old friends and pick up sidequests.

The above-ground action is entirely competent and enjoyable first person shooting, with Jackie's expanding array of Darkness powers providing some much-needed variation to the familiar run-and-gun shootouts. Strategically shooting out lightbulbs will allow you to use your powers, but also draw attention, so there's hectic juggling required to create areas of darkness while firing at the enemy and deploying both your own Darkness tentacles and the subservient, gibbering Darklings.

Lulling you into a familiar pattern of fantasy-enhanced urban shooting.

The city streets are well-rendered, but also a little sterile: there are very few passers by, and no traffic apart from hostile vehicles who are part of a firefight, creating a supposedly dense urban area that feels extremely empty even for the game's late night setting, certainly compared to the teeming streets of a Grand Theft Auto game.

For the life and character of the city to come to the fore, you need to descend into the Metro stations. It's where a lot of the game's vivid, albeit quite cliched, New York flavour comes across, with ageing hoods asking you to do a little (fatal) favour for them, breakdancers spinning on the floor, and street hustlers asking Jackie to find the lady.

These encounters are hardly subtle characterisation, but they're vivid and entertaining, as are other touches around the periphery of the gameplay that layer on the atmosphere. Ringing collectible phone numbers not only opens up bonus content, but also triggers short voicemail messages that are funny, memorable and often quite rude. As new areas load short sequences play of Jackie talking and, while these get repetitive after a while, Jackie's anecdotes about first kisses and deranged taxi drivers fill-out both his character and the depth of the game's New York.

While the basic plot of The Darkness doesn't have any massive surprises - we can see the tragic turns Uncle Paulie's campaign to break Jackie will take, and there's never any doubt as to how Jackie will retaliate - the way it is told does throw up some neat twists, the game lulling you into a familiar pattern of fantasy-enhanced urban shooting for just long enough to make a detour to another place altogether genuinely refreshing.

The Darkness isn't a masterpiece, and five years of both shooter evolution and technical progress have left it feeling a little crude and constrained. Even back in 2007 it was overshadowed by fellow shooter-with-superpowers Bioshock, and The Darkness' enemies in particular are repetitive and colourless compared to the deranged denizens of Rapture.

Nonetheless its an entertaining shooter with some interesting twists and a strong dose of character, and its well worth picking out of the bargain bins, especially if you're thinking of trying out the sequel.

You can support Mark by buying The Darkness