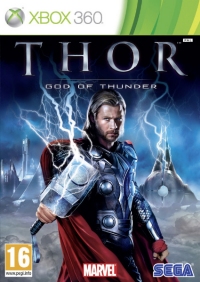 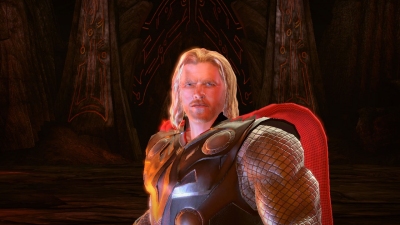 Thor: God of Thunder 360 is a bit too restrictive in its brawling to give the player a sense of god-like power, but is still a highly enjoyable and authentic prequel to the movie.

Unlike so many superhero stories, which need to start with an origin, the recent movie that Thor: God of Thunder derives from is about the Asgardian gods, who have been living their mythic lives for centuries. This leaves plenty of potential for a prequel drawing both from Norse mythology and the Marvel comics interpretation of that mythology, and that's exactly what Sega have done with this game.

Another advantage of mythic source material is that not only can the characters remain unchanged, but it is expected that they do so. The characters act like the archetypes they are: Odin is stern but wise, his son Thor is brave but headstrong, while Thor's brother Loki is, as always, a trickster, ever scheming to outdo his brother, regardless of the damage to Asgard he does in the process.

The game opens with the frost giants attacking Asgard, and Loki manipulating Thor into a rash retaliation against Niffelheim in defiance of Odin's wishes. That this is how the Thor movie starts as well is less a lack of originality and more the cyclical nature of these characters: Thor and Loki have their roles to play as conflicting brothers, and they will play them again and again.

While the film is a character piece set partially in Midgard, i.e. Earth, the game is a mythological, button-mashing fighter in the mould of God of War. While Kratos wielded his hooks and chains across the Greek myths, Thor batters his way about the place with his hammer Mjolnir, which doesn't just pack a wallop but allows him to unleash storm-based special attacks.

That Mjolnir acts as a sort of mythic sonic screwdriver.

Between book-ending battles in Asgard itself, Thor has to spend some quality hammer-time in the realms of Niffelheim (a world of ice), Vanaheim (forests and mires) and Muspelheim (fire, volcanoes). That these three worlds are all videogame cliches is hardly Sega's fault - the Norse myths predate even the earliest 8-bit platformers - and at least it gives each section of the game a distinct flavour and atmosphere.

Expanding beyond the worlds we see in the movie, the game's wider range of settings and monsters are true to the aesthetic of the movie, taking the boldness of the comic book designs and giving them a shiny, CG texture. Unlike other games based on comic book movies that bring in a wider canon, Thor doesn't crudely mix and match between the movie's designs and the simpler, more colourful characters brought in straight from the comics. The mystical realms here feel nicely consistent.

However, what these fantasy kingdoms have in consistency and surface gloss they lack in depth, either in terms of space or interaction. While draw distance is good, and Thor can fly between specific, marked points with Mjolnir, for the most part the God of Thunder wanders at ground level, fairly slowly.

That Mjolnir acts as a sort of mythic sonic screwdriver, activating runes to refuel power gauges and open doors, is a lovely touch but doesn't make up for scenery that is mostly pretty but entirely lifeless, with few opportunities for interaction. Thor may be an unstoppable god, but when he tries to walk through the ferns or tall grass of Vanaheim the foliage is as impassibly stiff as the walls of Asgard.

For the most part, then, the environments are just a backdrop, the walls of a series of arenas in which Thor must bash incoming baddies in a celestial whack-a-mole. For the most part this is good, fluid fun, with a little spice added by gaining Valor points in combat, points which can then be traded for power-ups and new moves.

These expanding abilities add a little depth to the repetitive little baddy/tall baddy/giant baddy variations in the enemy waves, as do three types of storm attack: thunder, lightning and wind.

The scripted dialogue is fine but unmemorable.

Although meandering, grounded Thor doesn't feel particularly god-like to control, Mjolnir itself packs an impressive and enjoyable wallop, either close-up with melee attacks, or when boomeranging the hammer at distant enemies. Grapple-finishes are bloodless but violent fun, with cartoonishly dramatic animation.

A raven in the eye socket, however, to whoever decided it would be a good idea to have QTE finishes for the boss battles: there's something deeply frustrating about suddenly being forced into a series of Simon Says button presses, breaking away from the core rhythm of the fighting.

For all the storming effects as the camera pulls back to give a wide view of Thor bringing down a cataclysmic special attack, the game is largely solid rather than cosmic. It all looks pretty, but the finer touches are a little rigid: character animations are acceptable but stiff, and the voice performances by stars Chris Hemsworth and Tom Hiddleston are, if you excuse the pun, disappointly low-key. Even when Thor is bellowing in rage, he seems a bit muted.

It doesn't help that the scripted dialogue is fine but unmemorable, with very few lines jumping out either as exceptionally good or bad.

A solid expansion of the film version of this mythology.

Thor: God of Thunder is hard to recommend purely as a game, especially as a full-price purchase. It's a bit too generic and shallow to stand up alongside Kratos and his triple-A fighting brethren.

However, for dedicated fans of the movie, this is a solid expansion of the film version of this mythology, one which contains a good dose of Mjolnir-spinning mayhem. If that's what you're looking for, then God of Thunder is well worth a look, either as a cheaper purchase down the line or a weekend rental.

You can support Mark by buying Thor: God of Thunder