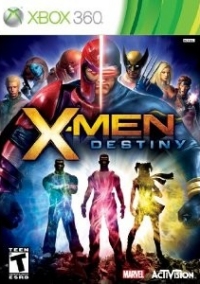 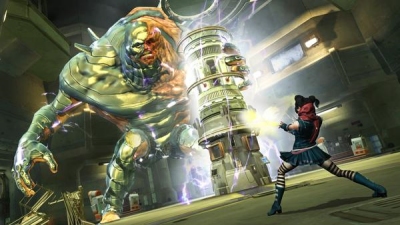 X-Men: Destiny 360 is an action RPG that lets you play with a lot of super powers, but as a comic book adventure its fatally lacking in energy.

Who wants to be an X-Man? On the one hand, you get genetic mutations that generally involve some kind of cool and useful super power. On the other, as the blurb in the X-Men comics usually says, being a mutant means the world at large fears and hates you. So it might not be the best gig after all.

Nevertheless, here's a game that gives you the chance, and offers a broader range of options than just letting the player control one of the big name characters from the comics.

As a premise, X-Men Destiny certainly has ambition: an action RPG that lets you pick one of three newbie mutants, choose from a range of powers as their mutations develop, and help either Magneto's Brotherhood of Mutants or Cyclops' X-Men resolve a conspiracy-driven crisis that has left the entire city of San Francisco in ruins.

Well, at times it is, with a real sense of comic book scale action. Murky textures and shaky animation can be forgiven when the backdrop of a fight is Magneto levitating the Golden Gate bridge overhead.

Where X-Men: Destiny lacks spectacle, it tries to make up for it in star power.

Suffice to say this version of San Francisco isn't an open world, being closed off not just by chasms and rubble but also by knee-high barriers, survivable drops which end in insta-death after a few feet (your character hovering in the air, Wiley Coyote style, as the game chugs to apply this arbitrary fail-state) and our old, old friend, invisible walls.

It's a plastic, painted-on world that never convinces where propaganda posters can be shredded by just touching them, but a flimsy bus shelter is entirely unaffected by your junior superhero/villain punching it with obsidian-gloved, burning fists.

Bridge aside, this San Francisco is also a flat, generic vista, with dull lighting and camera angles failing to bring any character to banal design work. Even the colour pallete is muted, giving the environments the feel of educational clipart. Hardly the bold, dynamic world of Marvel comics.

Where X-Men: Destiny lacks spectacle, it tries to make up for it in star power, scattering popular and cult-favourite X-Men characters throughout the game. Cyclops, Magneto, Wolverine, Emma Frost, Juggernaut, Nightcrawler... they're all here, plus quite a few more, and a surprise villain. They're broadly based on the current comic book versions of the characters, although Magneto's voice actor is doing something vaguely akin to an impersonation of Sir Ian McKellan.

At least that actor can be credited with at least trying. While some of the character animations are pretty good and expressive, the voice acting that accompanies them is for the most part soporific. I know Cyclops is generally considered a bit of a bore, overly serious, but here he's a droning dullard. Even bombastic hotheads like Juggernaut sound muted, half-hearted.

If the characters speak with very little passion, then they're at least in keeping with the rest of the game. There's something shockingly apathetic about X-Men: Destiny, a lack of drive or drama. For a game where the screen is often filled with laser beams and crackling electricity as mutant powers clash, Destiny feels fatally lacking in energy.

There are just so many parts of the game that feel throwaway and half-hearted. The character models are bland, drawing from across the history of the X-Men comics but not translated into 3D graphics in a particularly interesting way. Outside of battles the characters you meet either sit or stand stock-still waiting for something to happen, while rare bystanders will walk around in circles if they've got nothing to do. Enemies are prone to freezing on the spot or getting stuck in the scenery.

There's so much that's dull, old fashioned and tepid in X-Men: Destiny. Most of the action comes in the form of button-mashing combat against waves of thick-headed foes, who are hard to think of as a major threat when they're prone to freezing on the spot or getting stuck in the scenery due to bugs in the game.

Big bads aren't much better, with boss battles a matter of learning simple attack patterns and whittling down life bars. There's precious little feel of the stakes being raised as plot contrivances lead to your newly emerged mutant going up against some of the biggest badasses in the Marvel universe, with characters like Magneto and Wolverine going down as easily as generic mechs and mutant-haters.

Destiny never really develops any serious momentum in its storytelling.

When the likes of Wolverine - utterly invulnerable with a killer instinct and lethal combat skills - gets a pounding from a player character that only got their powers a few hours before, it's hard not to feel that X-Men: Destiny is set in a far more lightweight version of the Marvel mutant universe than the one we're used to reading and seeing, one where good and evil mutants battle it out but there's no reason to get worried or excited, it'll all sort itself out easily enough.

It's all playable and periodically enjoyable in the way that straightforward combat games that aren't fundamentally broken tend to be, but X-Men: Destiny never really develops any serious momentum in its storytelling, held back by the passionless execution. I was left wondering why I should be enthused by what's happening in the game when everything about the game seemed to scream a lack of interest.

Needless to say there's no need for an X-Men game to be this apathetic, considering the themes of prejudice, civil rights and the validity of political violence that run through the X-Men stories. The mutants are, depending on your viewpoint, an oppressed minority or a superior race or both, and from these complexities the different viewpoints of Cyclops, Magneto et al arise. This should be heady stuff, or at least interesting rather than vapid.

Instead the game seems to draw on the self-involved superhero soap of the X-Men comics at their worst, with a lot of garbled factions and few moments which bring home the stronger themes of the series. Comic book writer Mike Carey, who on a good day is a really excellent writer, provides a script that's OK but feels like a relic from the 90s heyday of franchise. It only increases the dislocated feel of having a near-future X-Men game in the year when the X-Men film series revisited the 1960s.

A self-involved superhero soap of the X-Men comics at their worst.

It's possible that Carey, and developers Silicon Knights, were crippled from the beginning by choosing a game concept that fundamentally misses the point of the X-Men. The action RPG approach provides plenty of choices and theoretical excitement to the player, but giving players mutations as a buffet or powers and pick-ups completely removes the idea of mutation as a natural occurring phenomenon which the mutants have to live with.

What was an analogy for race or sexual identity becomes instead a kind of toy box or costume box of abilities, which isn't the same thing at all. It's a sound enough basis for a game, but it takes away the dramatic weight of the X-Men concept. It leaves a game that lacks either a strong central narrative drive or a well-executed surface, and an experience that feels dull and insubstantial.

You can support Mark by buying X Men Destiny