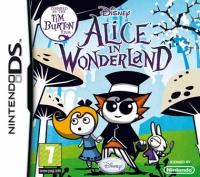 Alice in Wonderland DS is its own game, breaking free from both the book and the recent film to establish a bare bones narrative and sharp, humorous worldview that's all of its own.

One of the things I love about the Nintendo DS is that the platform's uniqueness forces developers to bend their game into a new shape if they want to succeed.

There are plenty of generic video games on the DS, which only use the second screen for info or inventory, and only use the stylus for menus. But even efficient ports of everyday games seem a bit pointless if they don't play to the system's strengths.

Alice in Wonderland is a great example of a game, a licensed game at that, which tailors every aspect of its game play and story to fit the DS. It strips the story and style of the movie down to cartoon basics, and then rebuilds them into something interesting.

It strips the story and style of the movie down to cartoon basics, and then rebuilds them into something interesting.

The story is cut down to absolute basics - Alice returns to Wonderland, and needs to find the Vorpal Sword to defeat the Jabberwocky. Before she can get the sword, she needs the help of the Cheshire Cat, White Rabbit and so on. Meanwhile, the evil Red Queen tries to stop Alice and her friends with an army of playing card soldiers, who will try and throw Alice into a vortex from which she can never return.

This boils down to a fetch quest, which on a home console would seem over-simplified, but feels perfect for a handheld. The dialogue is similarly trimmed, to blunt, snappish one-liners, with no attempt at Carrollian whimsy. This refusal to honour its literary roots feels refreshingly cheeky, but wouldn't work half as well if the visuals were weak or generic.

Ironically for an adaptation of a 3D film, the visual style is defiantly 2D, with graphics that use colour sparingly in stylised black and white landscapes. Characters are quirkily designed, angular and with deceptively few lines. The animation is utterly charming, from Alice's happy, little girl walk to the defensive arching of the Cheshire Cat's back.

This refusal to honour its literary roots feels refreshingly cheeky, but wouldn't work half as well if the visuals were weak or generic.

The whole look of the game embodies the pop-goth sensibility of Emily the Strange, or Burton's own character designs for the Nightmare Before Christmas, and proves atmospheric, appropriate and engaging. Wonderland - or Underland as it's called on Burton's watch - feels worth exploring.

These simple pieces - fetch quests, cartoon graphics, a quest across a 2D land - fit together like the puzzle pieces of Underland's map to form a surprisingly complex game.

Alice in Wonderland is all about the four supporting characters and their abilities - while Alice is central to the game, you don't play as her. Instead, you play as the White Rabbit and friends, alternating between them to navigate the landscape. As each character gains extra abilities, new areas become accessible, with ever more complex combinations of moves needed to get there.

As well as the teamwork, there's also the bond between all of them and Alice herself. You need to stay close to protect her, not just when the red soldiers attack, but the rest of the time. Ask her to stand still while you jump off to reach a difficult area, an she'll start to hyperventilate, and eventually be sucked into a vortex. Certain puzzles involve quick fingers and iron nerves as you leave Alice behind, run around using various abilities to open a new path, then try and get back to her before she's lost.

Destroy the monster, save the girl, save the land. Alice in Wonderland has about as straightforward a game story as you can get, but the sharp characterisation and distinct atmosphere, and the way the co-operation between the characters creates a complex web of game play, results in a title that's surprisingly rich.

You can support Mark by buying Alice in Wonderland