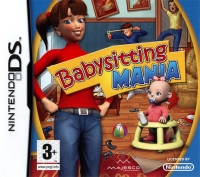 Babysitting Mania for DS may provide a chaotic challenge, but won't please anyone who actually likes babies or children.

There are a lot of baby related games on the DS, mostly claiming to in some way 'simulate' parenting or childcare. Not being a young girl, I haven't played any of these other titles, but I find it hard to believe many of them display such an active dislike for babies and children as Babysitting Mania does.

In the game, babysitting is less about childcare and more a matter of all-encompassing domestic drudgery: you turn up at a house, and you immediately need to clean the whole place, do the laundry, pick up the rubbish, all while trying to stop the kids from creating even more mess.

I found the interface surprisingly playable, clicking on various household chores in a chain, poking them with the stylus. Unlike a lot of low budget DS titles, the touchscreen is used relatively well, and the controls responsive. I found this quite involving, frantically poking different tasks to get them done before time runs out, my babysitter darting around the game map.

That's a simple, character-based story, but potentially a strong one to base a game around, one with lessons worth teaching to young players.

As an old school, twitchy game, Babysitting Mania is OK. As a game aimed at people who - presumably - picked it up because they like the idea of babysitting, it's very disappointing.

Any form of childcare is about forming relationships and learning about the child, about getting on their good side so they co-operate and behave. That's a simple, character-based story, but potentially a strong one to base a game around, one with lessons worth teaching to young players.

Babysitting Mania has none of that. The kids are all the same, mindless terrors who tear the place up. They're more like the Gremlins than children, a horrible, destructive scourge that can't be reasoned with. The babies, on the other hand, don't do anything, they just lie in cots, wailing for a bottle or a nappy change. You move from house to house, family to family, but the only difference is the number of kids and the floorplan of each home.

The gameplay is also a terrible lesson in childcare. Rather than providing risks and rewards, your best approach to the older children is to just put them in constant timeouts, sitting them down before they've even done anything wrong. By working them into the cycle of chores, I found that I could keep repeatedly time-out-ing the kids while I cleaned the house, did the laundry, and whittled down all the other unreasonable tasks that were nothing to do with babysitting.

I suspect they're also lessons those players won't enjoy.

The babies, meanwhile, can be ignored. As they don't move out of their cots, they can't actually damage anything else, so you can just leave them crying for a nappy change or a bottle until you have the spare time to get around to them, usually as an afterthought.

So, these are the things I learned from Babysitting Mania: children are terrors who can't be reasoned with; constant time-outs are the only language they understand; and you should ignore a baby that needs feeding or changing in favour of applying discipline to unruly toddlers and doing domestic chores.

These aren't really lessons I think you should give to the young players of a game like this, and I suspect they're also lessons those players won't enjoy.

You can support Mark by buying Babysitting Mania