Back at the Barnyard Games DS Review

Back at the Barnyard Games DS 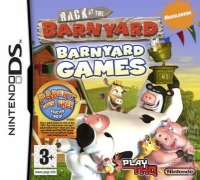 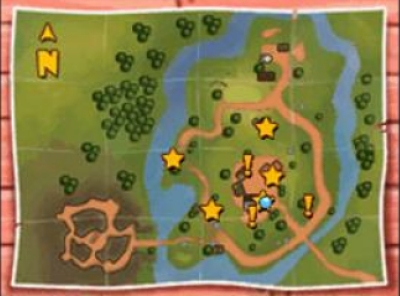 Beyond the bipedal livestock and, well, barnyard setting, Barnyard Games really doesn't give any feeling for what the film and TV show might be like, as even the Story Mode lacks any real story or character.

The core of the game are mini-games, all with a barnyard theme: there's a targeting game where you fire chickens, a driving game with a truck-full of melons, a tomato-flinging defend-the-flag game, and so on.

And a cow is exactly what you play, in the thin Story Mode that links the games.

Some of these are fun: the whack-a-mole game where you tap bucket-wielding raccoons is a lark, as are most of the driving games. A couple are downright awful: the side-scrolling motorbike game controls like, well, a cow.

And a cow is exactly what you play, in the thin Story Mode that links the games. Pick a cow, steer it around the small farm map, and perform simple object-finding tasks to open up the individual games.

These quests are entirely pointless, as all the items show up on a map on the top screen, and there are no obstacles set in your way: it's just a matter of travelling a short distance, and coming back again.

Once a mini-game is opened up, you can play it and be ranked on your performance. After achieving a required rank at each game, you move on to the next day's contests, where further games open up and higher ranks are required to move on to the finals.

What it lacks is any real substance or character.

It's all very, very simple stuff, and the controls and graphics are perfectly OK. What it lacks is any real substance or character. Writing this review only a couple of hours after putting Barnyard Games down, I struggled to remember anything about it.

If you desperately want to play agrarian twists on some standard game types, or if you've actually seen the film or TV series, then Barnyard Games is a competent and efficiently tooled product.

You can support Mark by buying Back at the Barnyard Games