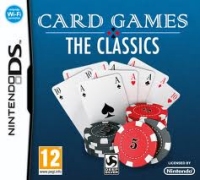 Card Games: The Classics DS is less a swish night at Casino Royale and more 3AM at the all night Burger King.

I've long forgotten any card games I was ever taught. I used to play a little back in university when the world was young, time was infinite and there were always plenty of other bored people to play with, but since then my interests have been drawn to more intensive, excitable and often solitary entertainments.

Entertainment like playing videogames, or writing reviews of low budget DS games on a Saturday afternoon.

It's a full life.

Anyway, should I be required to turn to a classic card game for entertainment, without the benefit of the in-game instructions in this DS title - say, if I was trapped in a caravan with an elderly relative as it sank to the bottom of a lake - I would be pretty much stuffed.

But that's just me. Card games have been around for ever, and they have the advantage of being easily teachable, but with great potential complexity. They're also cheap and accessible - who doesn't have a standard pack of playing cards just lying around the house?

Ubiquity leads to a wide and varied set of imaginative associations attached to a simple pack of playing cards.

At the top end of the images we associate with cards games are the glamour and excitement of James Bond playing baccarat (the book) or Texas Hold 'Em poker (the Daniel Craig movie) at Casino Royale, or X-Man Gambit blowing things up with super-powered playing cards.

It's the simplicity of the cards and the flexibility of the games that allow for such numerous and varying associations, the different emotions we can impress upon a simple combination of symbols, numbers and colours.

So, how does Card Games: The Classics contextualise games open to such different interpretations?

In innocuously pointless ways, it seems. The aesthetics are almost offensively inoffensive, from the fixed grins of the on-screen players to the corporate training video ambient wibbling of the background music.

The settings for the games are, apart from a baffling medieval castle for the Solo games, neither imaginative nor particularly interesting: what looks like a lunch room in a modern office for the Classics, and a tourist-y looking Casino for, well, the Casino games.

There's no attempt to express tension or glamour in the visuals, with characters dressed either in suits (Classic) or grim tourist wear (Casino), and those fixed smiles eliminating any drama from proceedings. I know a poker face is supposed to be about maintaining a consistent expression to not give away your hand, but isn't it easier to keep a straight face rather than gurn at your opponents?

No excuse for opting for a collection as basic and unattractive as Card Games: The Classics.

Digging beneath the unappetising surface, there's also little here to make Card Games: The Classics stand out from any of the many, many other card game collections available on portable platforms like the DS, mobiles or online.

From my novice/clueless perspective I found the slider for setting bets super-fiddly, while a Poker playing pal found the lack of escalating antes in Texas Hold 'Em led to a soporific pace. Both of us found the AI overly rational and cautious, providing none of the excitement that comes from playing against irrational, impetuous human players.

There are plenty of card game collections or specialised apps available. In this day and age there's really no excuse for opting for a collection as basic and unattractive as Card Games: The Classics.

You can support Mark by buying Card Games The Classics