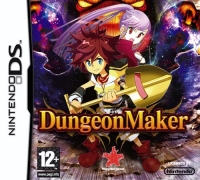 Dungeon Maker for DS has an inane story and feels more like work than play, but the cycle of toil and reward makes it strangely addictive.

I don't like Dungeon Maker. In fact, for a fairly bland game, I ended up hating it with surprising ferocity. However, I have to admit that as much as I disliked the game, I ended up playing it for hours, and in the end had to pull the cart out of the DS and chuck it to the furthest corner of the room just to stop myself. For all its faults, Dungeon Maker can't be accused of being 'unplayable'.

The story of Dungeon Maker, the narrative that supposedly justifies the action, is a thin collection of Japanese video game cliches thinly spread over the game, which don't really make any sense. You're a spiky haired kid who arrives in a village looking to get a job, and who finds a talking magic item. In this case it's a talking magic shovel, but really the fact that it talks and is magic isn't really relevant, beyond it being the kind of game where objects talk, and as you need a shovel that might as well be the item that talks.

The story is nonsense, a hastily thrown together justification for the central game mechanic of digging holes.

The mayor sends you to dig a dungeon with your magic shovel, and fill it with rooms to attract monsters. The reasons keep changing: sometimes it's to draw monsters out of the woods, at other times it's to attract tourists, and occasionally it's because he wants to have a monster stuffed. Underneath all that waffle, it seems that someone had an idea for a game where you built a dungeon, and the reasoning was bolted on later, with scant thought to whether it made any sense.

So, the story is nonsense, a hastily thrown together justification for the central game mechanic of digging holes, building rooms in them, then killing the monsters who appear in those rooms. Monsters mean treasure, treasure can be spent on more rooms, and as time goes on the dungeon gets bigger and the monsters get nastier.

It's in that routine of dig/build/kill and sell/buy/use that a deeper story reveals itself. It's a story that kids may find exotic and interesting, but which adults are more likely to find painfully familiar. It's the story of a young man who gets up every day, does something boring and repetitive for financial reward, spends his money, eats a meal, then goes to sleep so he'll have the energy to do the whole thing again the next day.

As the game goes on, the days get longer, but remain roughly the same routine: you get up, you go down the dungeon, you build some rooms and you kill all the monsters for treasure and items. Then you leave, sell all your loot, get the woman who lives in your house (don't ask) to cook you a meal, then go to sleep. At which point you get to save the game, then start the next day.

It's a story that sank its claws into the grown-up, responsible part of my brain and exploited the instinct that says you need to work hard.

It's a story that sank its claws into the grown-up, responsible part of my brain and exploited the instinct that says you need to work hard, probably at something you don't enjoy, to receive rewards. Maybe it's because I'm freelancing at the moment, so I don't actually have a 9 to 5 job right now, but I found myself spending hours digging holes and killing Dungeon Maker's uninspired, Pokemon-lite monsters.

Or maybe it's because I was playing the game so I could write this review, so really I was working, and the fact that the game was a painfully tedious grind made it feel like good, hard worthwhile work?

Regardless, when I realised that I had spent a Sunday afternoon playing a game that wasn't actually fun, I finally stopped. If you want a game that's time-consuming while never being really challenging, perhaps to kill time on a very tedious trip, then Dungeon Maker might be for you. It's competent and inoffensive, and proves strangely addictive.

Me, I'm going to go fetch my own, not-magic shovel, and bury this game in the garden so I don't lose any more afternoons to it.

You can support Mark by buying Dungeon Maker