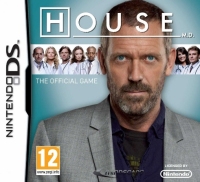 House MD: The Official Game DS retains some of the TV show's wit but is otherwise a cheap and overly linear cash-in.

House MD, the formulaic but highly watchable US TV show about an irascible doctor solving medical mysteries, recently ended an eight year run. That's a lot of episodes, but if for some reason that isn't enough for you, there is a game available.

You could be forgiven for not knowing that. Hardly a high profile release, I found my copy second-hand, driven to search it out by a morbid desire to see a big budget US TV show squeezed into a cheap DS tie-in game.

My expectations were confounded. Well, a bit. Not much. House MD: The Official Game is in many ways typical of these DS games based on mainstream American telly: static graphics that have a 90s, paintbrush type appearance and are clearly heavily based on photo reference, and a reliance on repetitive mini-games.

Unsurprisingly, the mini-games are mainly medical procedures reduced to swipes of the stylus, Simon Says button bashing or other simple tasks. Trauma Center light, exactly as you might expect.

What elevates this tie-in above others is that the writing does a pretty good job of aping the (if you'll excuse the pun) house style of the TV show. The five chapters each have plots that you could believe would be episodes of the show, complete with the requisite twists and extreme symptoms: there's a TV explorer who seems to have exotic disease in spite of recording his travels on a sound stage for the last decade, an arrogant chef who turns bright blue, and a fratboy who finds himself paralysed while locked in a coffin during an initiation ceremony.

The abrasive character of Doctor House himself is also preserved in snappish dialogue, although sometimes his one-liners descend into repetitive verbal abuse rather than actual wit. Overall, though, the cast of the TV show are captured well by the dialogue and their actions in the stories, even if the stiff visuals mean their appearance can often be alarming. When House dresses like a fratboy or a circus clown during a differential diagnosis, those pranks ring true to the show.

There's also a willingness to address adult subject matter, with sex and drug references throughout, although there's very little gore compared to some of the more overtly gross cases seen on TV.

The game doesn't quite have the bleakness of the TV series.

However, the game doesn't quite have the bleakness of the TV series. House is a lot closer to his patients in the game and generally ends up helping them out more than he would in the show, and there's a lighter, more upbeat tone throughout, right down to comedic music cues at the end of scenes.

More authentic to the source material than you might expect, then, but that doesn't make for a brilliant game. House MD is incredibly linear even for a story-based game, and the minigames don't effect the progress of that story - fail enough times, and House or Cuddy will step in to save the day and move the story along. The mini-games aren't really that enjoyable in themselves, and in the case of a couple are so fiddly that the lack of any fail state will be a blessing.

If you're incredibly desperate for more House in your life following the end of the TV series, then this game is a very weak substitute that will amiably pass a few hours. As an experience in its own right, however, it's distinctly middling.

You can support Mark by buying House MD The Official Game