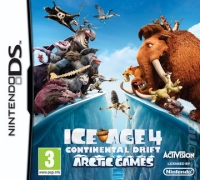 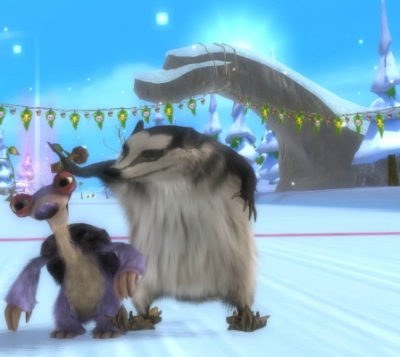 The Ice Age series of CG animated films are generally considered to live up to their name, a seemingly endless cinematic wilderness without a laugh or interesting plot in sight.

The overly-titled (deep breath) Ice Age 4: Continental Drift: Arctic Games is the obligatory but entirely unnecessary DS tie-in game for the latest movie. As its tertiary title suggests, it's a minigame collection. Let joy be unbounded!

The game's plot sees Diego the Sabretooth Tiger, Sid the Sloth, and, er, the other ones, confronting some pirate animals (yes really) over some treasure (a big bowl of fruit, this being the ice age and food being scarce, right?).

The pirates - led by a monkey in a tricorn hat - suggest the matter be settled by the arctic games, a traditional contest apparently.

These games are actually reasonably well executed takes on overly familiar game types - simple racing, sidescrolling platforming, firing at targets and so forth. Apart from some (mammoth) wooliness in the controls for the games which use the touchscreen rather than the control pad, they're perfectly competently done, albeit deeply uninspiring.

This isn't a broken game. Technically, it's perfectly competent, and the presentation is of a professional standard.

The appeal for fans of the films will not be in the absolutely standard gameplay, but the Ice Age trappings - the extent to which it feels like an authentic product of its parent franchise.

On the plus side, there are a lot of cutscenes, animated to a quality that, squinting at the DS's tiny upper screen, look comparable to the animation in the films.

Between each round are scenes of the creatures bickering, with brief pauses as the game works out which version to play depending on whether you won or lost the last round. In terms of straight up video content, theres a lot here, and it feels authentic.

Unfortunately while the cutscenes are plentiful and look nice, they're at best boring and at worse downright irritating, with the goodies and baddies exchanging endless witless quips and insults that fail to raise even the thinnest smirk.

Ice Age 4 is a zombie game, and not in the sense that it's a survival horror.

It doesn't help that the sound on the clips is tinny, sounding distinctly over compressed and muted, especially compared to the boldly irritating beeps and cheers of the gameplay sounds.

Ice Age 4 is a zombie game, and not in the sense that it's a survival horror: it's just a lifeless thing, mindlessly jerking it's way through the motions of being a videogame while lacking any spark or character. It's competent technically, but from it's thin plot down to the minor details it's a weak, uninspiring product. One to leave out in the cold.