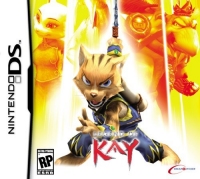 Legend of Kay DS has a strong central premise in 'The Way', a philosophy of non-violence that means combat is a no-no, but while avoiding violence the game fails to find anything entertaining to replace it with and instead resorts to endless, tedious cut scenes.

Legend of Kay is proof that being original or unusual doesn't necessarily result in being interesting. Player character Kay and his friends practice a belief system called 'The Way', which strictly prohibits causing harm to any sentient creature.

Setting out on Kay's mission to free the various peaceful animals of Yenching from a marauding alliance of gorillas and rats, I was in the refreshing position of not being able to resort to violence. There are no attack buttons in Legend of Kay, just movement controls (including hide, run and seek) and an interaction button to read, talk, flick switches etc.

So instead of fighting I had to... well, just avoid enemies really, and well... that's it. Not only is physical conflict off the table (apart from towards spiders, who you can stamp to death for money in a baffling loophole), but so is pretty much any type of interaction.

I spoke to characters, but they only had one line of dialogue each. I approached buildings, but the doors didn't open. I went to swim, but Kay is a cat and he doesn't like water, so I drowned and reset to the last checkpoint.

The world of Yenching is a drab place, like the landscape of any other 3D platformer a thousand years after an atomic bomb has scoured all signs of life, civilisation or interest. In the ruins have grown grass, spiders, and the odd coin to be picked up.

All I had to do in Legend of Kay was follow an arrow to my next destination, jumping over gaps, pressing 'A' when facing statues to activate doors, and finding a route around any sentries I came across. The world was empty, charmless, just me and the spiders and sentries and platitude spouting, static villagers.

The main challenge was finding my way to the next objective, a process hampered by the arrow directing me there pointing to it as-the-crow-flies, rather than path finding around corners and so forth. Often, I would need to head in the opposite direction to where the arrow was pointing to make my way around the walls and tunnels to my objective.

It's not that the game lacks plot. There's an elaborate story about peaceful villagers, four tribes of good animals, a religious philosophy, and an alliance of alchemist rats and warrior gorillas bringing tyranny to the land.

But none of that, not a damn bullet point of the storyline, is interactive or part of the main game play. It all takes place in slow, comic-book-panel cut scenes which scrape across from one block of drab artwork and charmless exposition to another, with no escape from the player beyond clicking through to the next bit.

Even the disagreements between Kay, his sensei and his friend/love interest take place out of game, in ghastly close-ups of the stiff, unlikable anthropomorphic animals.

(There's an audience for a story where dead-eyed cat-people have a tense, joyless flirtation, but I'm not sure it's the same one the makers of Legend of Kay were looking to sell their game to.)

There's an audience for a story where dead-eyed cat-people have a tense, joyless flirtation.

Legend of Kay is a drab, dismal game that alternates between unplayable, indigestible chunks of over-complex plot and playable wandering through desolate, tedious landscapes with nothing to do.

It may avoid violence in-game, but this is exactly the kind of infuriating rubbish that inspires violent thoughts in the player. Avoid at all costs.

You can support Mark by buying Legend of Kay