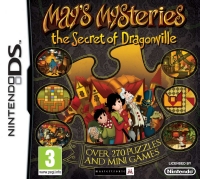 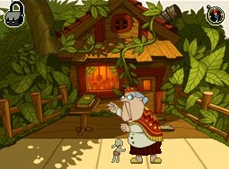 May's Mysteries: The Secret of Dragonville DS falls flat in its attempts at whimsical charm, and will stand or fall on whether you like its specific brand of brainteaser or not.

There may be many mysteries surrounding May, but the kind of game she's in isn't one of them. A mysterious town, cartoony art, a faux European atmosphere, and a lot of back-of-a-newspaper-supplement brain teasers to solve?

May's Mysteries could only make its status as a lightweight take on Professor Layton's hugely popular adventures more obvious if it was actually called Layton Lite.

Anyway, long time readers of this column may know that I'm not the Layton fan in my household, my wife is.

Sadly, she's too busy to do my job for me, so you're stuck with me, and I'm rather less sympathetic to a game where strangers will block your path and not let you pass until you solve a riddle involving taking three matchsticks and a marble across a river on two consecutive Wednesdays without them eating each other.

Considering May is a young girl it feels particularly creepy.

Get lost puzzle man, I've got places to be.

This kind of thing feels forced in Professor Layton games, but considering May is a young girl it feels particularly creepy in this game, with old men refusing to let her go about her business until she's shown them what she can do with five planks of identical length.

Anyway (again, I may be drifting off-message here), May finds herself stranded in the town of Dragonville after a balloon crash. She woke up near the town to find her young brother Tery (yep, that's the spelling) gone, yet in spite of the apparent urgency of a missing child the locals won't let her get anywhere without solving their damn puzzles.

Now, let's leave aside the quality of the puzzles. They all fit into a familiar set of types, from the aforementioned logic puzzles to simpler stuff like hidden object rounds and those sliding tile puzzles. There's also some sudoku type things that I couldn't remotely grasped, and a rhythm action game that's punishingly precise.

Let's just say that if you like these sorts of puzzles, you'll probably like the ones in this game. I don't and I didn't.

Which leaves the presentation and the narrative. Having looked at Professor Layton over my wife's shoulder, I'm very familiar with the delightful style and charm of those games.

May's Mysteries tries to be in Layton's league, but it really isn't. The art style is very familiar, but the characters look generic and lifeless compared to those in the Layton series. The animation is nice enough, but there isn't much of it, and it's plagued by horrible voice acting - in spite of the cod-European, steampunky world, May has a baffling high-pitched American whine of a voice.

May's Mysteries desperately wants to be whimsical and charming.

Thankfully, there's very little spoken dialogue and a lot of text boxes to click through. Less thankfully, most of this dialogue is pretty tedious, and if you fail a puzzle and need to retry it May needs to work her way through the whole lead-in conversation all over again, desperately tapping through each dialogue box.

From the art style to the hokey dialogue to the tweedly music May's Mysteries desperately wants to be whimsical and charming, but instead its just gratingly winsome. If you love the kind of puzzles on offer here, it may be worth a crack, but as an attempt to capture the Layton lightning in a bargain bottle it's a failure.