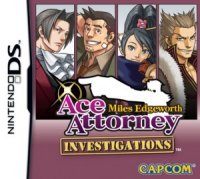 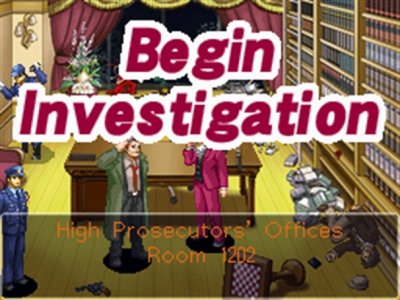 Miles Edgeworth: Ace Attorney Investigations DS is even more like an old school graphic adventure than the legal antics of Phoenix Wright and Apollo Justice. Although the new game escapes the courtroom, it sticks to the series' strengths: thrillingly ridiculous storylines, with great characters and witty dialogue.

Capcom's Ace Attorney series commit what many consider to be the cardinal sin of story-based games, by having relatively limited interaction: each game follows a linear mystery story, loaded with dialogue to click through.

Miles Edgeworth: Ace Attorney Investigations adds a third person view to the usual animated close-ups, and is set entirely outside the courtroom, but otherwise the structure is the same - collect evidence, interview witnesses, and highlight contradictions in testimony by presenting evidence.

It's a rigid format, and the player's puzzle-solving role is not so much a matter of 'solving the cases' (skipping ahead to the resolution by presenting a smoking gun out of context won't 'win' anything) but to find the answer that allows the plot to proceed.

Not being able to cut to the chase can be frustrating, and the logic of what to present when can be fuzzy at best. There's only ever one right answer to progress, and finding it can be a matter of trial and error.

Ultimately the series, and Ace Attorney Investigations is no exception, gets away with its structural quirks and lack of freedom because of the sheer strength of its storytelling: involving plots, bravado execution and, most of all, great characters.

Miles Edgeworth, has his own voice, personality quirks, and internal monologue.

Character is key to Ace Attorney's success. Most games have lead characters who are either straightforwardly heroic and/or deliberately blank slates, a canvas on which the player can project their own personality and fantasies. Theoretically, a blank protagonist allows the player to project themselves into the game.

Ace Attorney has no truck with any of that. The character the player controls, in this case prosecutor Miles Edgeworth, has their own voice, personality quirks, and internal monologue. I may be guiding Edgeworth while playing, but he's his own man, not an extension of me.

And what a character he is. By making the fifth game a spin-off, Capcom have pushed an anti-hero to centre stage. Phoenix Wright and Apollo Justice, though quirky and strong-willed, were everything a hero is supposed to be - youthful, enthusiastic, relatable.

Miles Edgeworth, on the other hand, is aloof, snobbish, judgmental, even fogeyish. With his pallid complexion and cravate, he's twentysomething going on two hundred.

Of course, that's the paradox of an anti-hero, the appeal of the unlovable: Edgeworth's relationships with friends and colleagues are touching precisely because he's so reticent, because every occasional slip of emotion or humour is so hard-won.

There are plenty of great new characters as well, including a vulpine Interpol agent and a detective so noir he's in black and white.

Edgeworth is the straight man at the centre of the drama, but he's balanced by a supporting cast of eccentrics who make him seem relatively sane. Aside from the constant presence of Edgeworth's foil, the incompetent Detective Gumshoe, plenty of old favourites cameo in Investigations, and I won't spoil any for long-term players.

There are plenty of great new characters as well, including a vulpine Interpol agent and a detective so noir he's in black and white, the series eccentric, hyper-real approach to character design churning out some wonderful creations. Although there's no supernatural elements this time around, the world of Ace Attorney remains distinctly heightened, with multi-storey passenger planes and samurai celebrities.

As over the top as it may be, Investigations retains all the elements needed for a great crime story, a multi-layered plot where a cast of interesting characters are drawn into a vortex of suspicion and counter-suspicion. The five cases hop around in time, layering the relationships and the ongoing tale of an international smuggling ring and a notorious thief.

Plot is, of course, only a road map for storytelling, and thankfully the execution lives up to it. Capcom know how to create a stirring moment, with great character designs jumping to life with energetic animation, driving music and anime speed lines. One particular neat trick sees Edgeworth piecing together a case in a flurry of monochrome flashbacks, the clues hurtling across the screen as the pieces drop into place, ready for the player to put them together.

All those dramatic tricks are underpinned by the quirky humour and charm that run throughout the game. The script is as good as any in videogames, with each character's dialogue having a unique voice, their lines popping with jokes and smart turns of phrase. The game may be Japanese, but the localisation is so good it reads like it was designed in English.

Ace Attorney Investigations is another great instalment in the series, a real treat for long-term fans, but entirely accessible to newcomers

Ace Attorney Investigations is another great instalment in the series, a real treat for long-term fans, but entirely accessible to newcomers (it's even careful to not spoil the plots of any of the previous games when re-introducing characters). It's linear, yes, and sometimes it feels like you're watching a story as much as you are playing it - but it's a great story, with wild twists and appealing characters, told with great drama.

If you own a DS, you need this.

... I have just one more thing. Capcom? Never mind the Resident Evil movies, we want that Ace Attorney anime. Now.