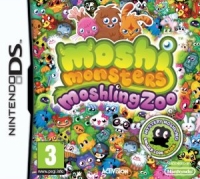 Moshi Monsters Moshling Zoo DS is a non-violent alternative to Pokemon that provides many hours of monster-collecting fun - providing you don't mind a little repetition.

Moshi Monsters: Moshling Zoo DS, a spin-off from the hugely popular pre-teen online PC game, provides some parent-friendly variation on that theme by making the business of searching for Moshlings, the cute pet creatures of the Moshi Monsters, combat-free and rooted in cooperation.

The premise is that you own a Moshling Zoo. Rather than stocking up your zoo in the traditional manner of sedating and trapping wild creatures, you must instead persuade the Moshlings that your zoo is a really nice place and they should move there of their own free will.

Once they're in your zoo there's nothing forcing you to keep your side of the bargain up by grooming and feeding the little critters. I found the feeding minigame too tedious to bother with, so I let them starve.

Before beginning your reign of virtual deprivation, you need to find the Moshlings and lure them to your zoo. The Moshlings live across eight small, side-scrolling environments, and persuading them to join the zoo requires a combination of simple puzzle-solving and investing in treats and improved conditions.

The puzzles are straightforward enough, finding and combining objects to please the Moshlings - for example using a string to tie-up a hammock, or to fix a guitar. The other side of pleasing the Moshlings involves purchasing treats and improving their environments - some Moshlings won't even appear in the outdoors until you've upgraded the appropriate zoo environment for their class to a suitable level.

The repetition and the grind of Moshling Zoo-keeping kicks in.

This is where the repetition and the grind of Moshling Zoo-keeping kicks in, because buying all this stuff requires money, and money is earned by finding gems around the environments - adding up to little more than small change - or by competing in races and minigames, which are far more lucrative.

Unfortunately, neither the races nor the minigames display enough variation to maintain interest for the many, many times you will need to play each to raise enough cash for all the treats and items you'll need to buy.

While this pattern of cash-grinding and monster gathering is repetitive, it can also be quite addictive if you're prone to getting hooked on the collection of meaningless virtual objects. It certainly hooked me and my insect brain, at least until the point where I couldn't take another round of mini-games to raise enough dough to buy an exceptionally lavish treat for one of the last moshlings.

However, to fully appreciate Moshling Zoo, you need to be invested in the Moshlings themselves, to take an interest in nurturing them, feeding them, and steadily level them up to compete against each other.

That, I was less interested in. While they're smartly designed little critters, divided into some fun categories beyond the usual plant and animal types (instead we get ninjas and 'worldies', who are based on famous monuments), they never quite captured my affections enough to want to spend that much time with them.

Nevertheless, there's plenty of harmless monster-collecting fun to be had here, and the game is neatly put together. Younger players with completist tendencies will be able to sink many hours into Moshling Zoo, while conscientious parents can relax that the game ticks all the non-violent, co-operative boxes they could wish for.

You can support Mark by buying Moshi Monsters Moshling Zoo