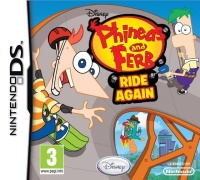 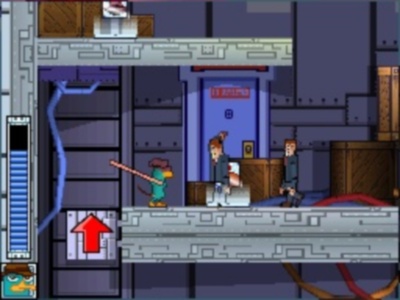 Phineas and Ferb Ride Again DS is a cartoon tie-in that uses its lead characters' interest in inventing as the basis for enjoyably imaginative platforming.

Spinning out of another hugely popular kids' cartoon I've never actually seen, Phineas and Ferb Ride Again sees the eponymous duo doing what they usually do (according to wikipedia): spending an endless summer vacation building unlikely inventions while evading their vindictive sister Candace.

As a premise on which to base a game on, the set-up of Phineas and Ferb isn't a bad one, and Ride Again is quite a smart and fun translation of that premise into videogame form.

Each level starts with the two strangely-shaped step-brothers setting off from their backyard into cartoon suburbia on a quest to find the parts required to build their current project. The levels are standard side-scrolling platform environments with hazards, ladders and so forth, but to get to the project parts requires more than just timed jumps: Phineas and Ferb's individual skills will be needed, as well as the use of gadgets like jetpacks, drills and gravity rays.

To build those gadgets in the first place, you'll need to find the plans as well as special components and a stack of generic parts (although the latter are generously scattered around the world, both lying around and lightly buried). There are also useful objects like trampolines and airships that can be fixed up to access new areas.

Building or fixing a gadget involves simple minigames with appropriately tactile, mechanical feel, like hammering nails, scratching off dirt or turning screws. Straightforward enough tasks, but satisfying, and once you combine the need to use different gadgets and powers to make progress with the individual minigames, the resource management aspect and large maps full of hidden corners, the game becomes surprisingly rewarding.

Complex by the standards of a kids game, Phineas and Ferb Ride Again nevertheless always breaks down into simple, accessible tasks, never allowing the player to feel they're get lost or swamped in complexity. This approach provides just enough challenge and incentive to explore to be quite addictive.

Success is measured by completing each invention, and rewarded with getting to play with said invention. Failure, in terms of falling too far and otherwise drawing attention to yourself, results in erosion of a lifebar representing Candace's patience with your antics. Run out of life and you're 'busted', and need to complete a maze-based minigame to escape Candace and get back to the main game.

The game as a whole is as bright and colourful as you would expect from a daytime cartoon, presenting a breezy cartoon America with surreal touches like giant monsters walking in the distance in the background. The music, however, becomes irritating relatively quickly.

It's a game that plays well, the platforming fair with responsive controls, with only the inter-level twitch-gaming as platypus/spy Agent P proving irritatingly hard and repetitive. It's a shame that you need to complete these to progress, as they're a real chunk of grit in an otherwise enjoyable game.

Platypus hijinks aside, Phineas and Ferb Ride Again is a surprisingly involving little platformer that exploits the concept of school-age inventors for some clever gameplay. Worth a look, especially if you're a Phineas and Ferb phan.

You can support Mark by buying Phineas and Ferb Ride Again