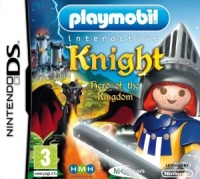 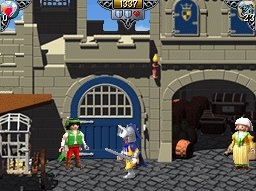 Playmobil Knight: Hero of the Kingdom DS is the child-friendly toy version of Skyrim you never actually wanted.

Dragons streak across cloudy skies, the woodlands are full of roaming bad guys, dark forces assail the land and only you, yes you, can sort it all out with a bit of combat, some inventory management and, most horrifying of all, grinding your way through the same levels again and again to gather enough coinage for all the armour, weapons and so forth you'll need for your quest.

Playmobil Knight: Hero of the Kingdom on the humble DS has more in common with big-boy RPGs like Skyrim than you might reasonably expect. Yes, your hero is Brian the Beet Farmer, dubbed Sir Beetalot by the king and very much a comedic hero rather than a frowning fantasy archetype.

And, yes, everyone looks like plastic toys designed for pre-school children, complete with those clawed fingerless hands Playmobil figures have.

And, yes yes yes, it's all very cute and amiable with slapstick cut-scenes and silly characters. But, underneath all that beats the heart of an RPG. A cold, merciless heart with an obsession with in-game economics, buffing stats and other exercises in resource management.

It's a bit of a surprise to find out just how complex the gameplay of Playmobil Knight is beneath the happy exterior and simple combat, and not really a pleasant surprise, either.

The general thrust of the game - save the good kingdom from the bad knights by performing quests which either involve fetching stuff or hitting baddies - is simplicity itself, and that central simplicity doesn't really benefit from requiring the player to work out what size of dragon they want to buy, what potions to stock up on, and so forth.

Oh, and don't forget to visit the blacksmith to keep your sword sharpened, lest it fail altogether and ye be left unarmed. Everything requires cash, and the simplest way to get cash is to wade into the short action platforming levels near each town on the map and collect some coins while fighting Dragon Knights.

This gameplay loop is fiddly and not at all fun. It's grinding, the worst excesses of RPG tedium, and it jars horribly with Playmobil Knight's breezy, semi-humorous plot, silly characters and bright plastic presentation.

Beneath the bright and silly surface, much of Playmobil Knight is slow and turgid. Dragon flight in particular is an absolute chore, with cumbersome controls, and the sub-shopping trolley steering becomes a real problem in combat. Losing your dragon requires you to buy another before you can travel anywhere, leading to another frustrating round of gold gathering.

This level of grinding requires stronger motivation than the light story and aesthetics can provide, and the charming cheeriness of the game becomes a disadvantage when it should be a strength.

I wish them luck while running in the opposite direction.

With a range of minigames and 91 quests, there's a lot of content here for a licensed kids DS game, but it will take a lot of patience and a high tolerance for rough controls and repetition to dig it all out.

To the brave knight who attempts such a quest, I wish them luck while running in the opposite direction.