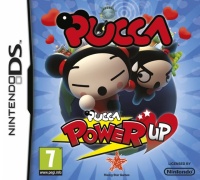 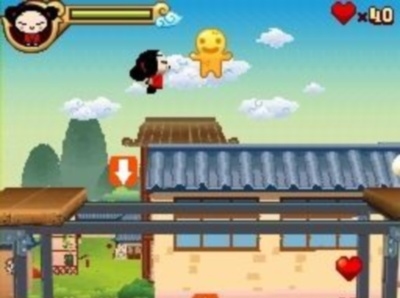 Pucca Power Up DS is a high octane traditional platformer with lashings of cutesy Korean style.

Love stories, or at least stories that contain a strong aspect of romantic love, are predominant in virtually every medium, except for videogames. In the west at least, it's very rare for romantic love to be central to a game.

Well, Korean media tie-in Pucca Power Up is all about a romance, albeit a stalkery and cartoonish playground romance. Although not very well known in the UK, Pucca is a bit of a media phenomenon across the world. It's the story of ten year old girl Pucca, who lives in a noodle house, and her romantic attachment to Garu, a twelve year-old who is the scion of an ancient ninja dynasty. While created for a card game, the property is now best known as an animated series.

As a game, the story is about the pursuit of love, literally a pursuit as young Pucca chases her unwilling beau, and that constant movement from left to right drives the game onwards. When Pucca catches Garu, he struggles away from her kisses only to run off again. On alternate levels, the player gets to play Garu running from Pucca.

As Pucca chases Garu there are platforms to jump on to and hazards to avoid. Romance remains the dominant theme, with hearts to collect as an in-game currency, and Pucca knocking out enemies and hitting switches with a cupidesque bow and arrow. There's even a minigame where Pucca has to rescue Garu from drowning, reviving him with a smoochy kiss of life.

The core of the gameplay is side-scrolling platforming, and it plays well with the action nimble and precise. But it's the presentation that really makes the game, an effervescent sense of bouncy joy to Pucca and Garu's cartoon world that provides the momentum a game like this needs.

Love stories are predominant in virtually every medium, except for videogames.

The visuals are great, with lovely clean character designs and colours that really pop. The music is relentless and frothy, and at intense points the game becomes a rush of candy colour and bubbling sound.

It won't be for everyone, but if you like 16-bit era platformers then Pucca Power Up is energetic, charming and, yes, a bit romantic.

You can support Mark by buying Pucca Power Up