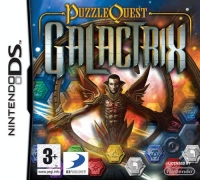 The first Puzzle Quest combined the one-more-go, quick-hit game play of a colour-matching puzzle game with the grinding and skill-development of a simple role-playing game to create a time-sink of epic proportions. Long train journeys, Sunday afternoons, the end of the day when you should really be reading an improving book: those hours would disappear into Puzzle Quest's bottomless pit. It was great.

One of Puzzle Quest's endearing qualities was the flimsy fantasy storyline, with its young hero, evil Dark Lord, and supporting cast of rogues, wizards, dragons and other cliches, in a tale told through static artwork and short bursts of written dialogue.

For follow-up Puzzle Quest: Galactrix, everything is different but everything is pleasingly the same. The game board may have been given a hexagonal twist that makes movement of the tiles a little harder to predict, the action may have been relocated from a cod-medieval neverland to deep space in the far future, but you're still a thrusting young hero or heroine, setting out to play factions off against each other and fight off a lifeless evil from the far, far edge of the game map.

Every hackneyed element of epic space opera is here: mega-corporations, genetic research, shiny jumpsuits, telepaths, anthopomorphic alien races. The mish-mash of influences come from some odd places: human characters dress like something out of Dune, the bad guy looks like the cover to a dodgy SF Manga, and even the victory music sounds reminiscent of, of all things, the theme to the original Battlestar Galactica.

It's all completely derivative, but it works, brilliantly, because it's the right story for this game in this medium. The Puzzle Quest series needs stories that can fill the gap between bursts of puzzling game play and string the mechanics together, while being told with static graphics and very few words.

Puzzle Quest taps into a nostalgia for the chunky paperbacks of my childhood.

This is not the place for tricky, complex concepts or nuanced characterisation, but for clear, simple concepts that can be laid out in a few words and pictures, but which are sufficiently evocative to let the player fill in the rest with their own imagination.

For me, this is an easy leap. By cribbing from epic fantasy and space opera, the Puzzle Quest games tap into a nostalgia for the chunky paperbacks of my childhood, of worlds that existed only partially on the page, and partially in my own imagination. Galactrix's universe is a shorthand version of a generic space opera universe, but that's OK: I can imagine the rest myself.

You can support Mark by buying Puzzle Quest Galactrix