Shaun the Sheep: Off His Head DS Review

Shaun the Sheep: Off His Head DS 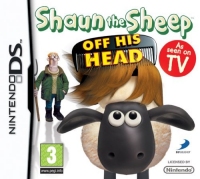 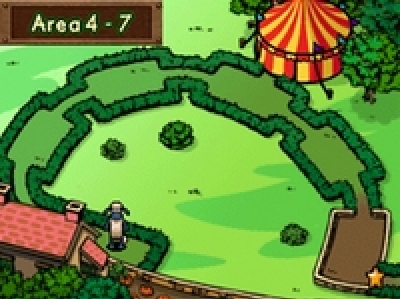 Shaun the Sheep: Off His Head DS may be based on a show aimed at little kids, but its gameplay is surprisingly unforgiving, and as such is unlikely to please younger fans of Shaun and his friends.

Aardman Animations are a British national treasure, with a place in our culture somewhere between the homemade quirk of Oliver Postgate and the broad mainstream comedy of Ealing Studios.

Aardman's output stretches from tiny arthouse shorts to international box office hits, and characters like Wallace and Gromit or the star of this game, Shaun the Sheep, appeal to a wide age range.

Introduced in the third Wallace and Gromit film, A Close Shave, Shaun has since gone on to have his own BBC show, a wordless series of stop motion animated shorts filled with Aardman's typically inventive sight gags. With its age six-to-sixty appeal, Shaun's show is a good fit for a game on the DS, with its similarly broad user base.

In some respects Off His Head sticks closely to the TV show, with spot-on visuals, sound effects and annoyingly infectious theme music. The story is a suitably simple comic premise - the farmer loses his wig, and Shaun needs to get it back.

There are also cute, funny Aardman eccentricities in the gameplay, like bigger sheep running in to frame to act as trampolines so Shaun can jump fences. The game has some charming extras that add value, like a virtual colouring book and puzzles in the instruction booklet.

But... but... but... for all the pleasing aesthetic touches, there's a rock hard core to this fluffy kids game. And by 'hard', I mean 'incredibly difficult'. For the most part the game is simple enough, with Shaun wandering around the farm jumping over hedges and collecting objects. Until he hits a hazard.

The story is a suitably simple comic premise.

On his quest to find the wig, Shaun has to stay out of sight of naughty pigs, duck to dodge stinging bees, and generally evade hazards. To get past these threats unscathed requires a combination of stealth and the kind of twitch reactions unseen since Miner Willy was a lad. It's surprisingly punishing.

Take one stealth section where Shaun has to follow a naughty pig, ducking behind bushes when he turns in Shaun's direction, then dashing to the next cover while piggy's back is turned. Get spotted, and Shaun gets kicked back to the beginning of the stage.

It must have taken me fifteen attempts to get past that bit, and I'm a 35 year old who considers himself to be pretty OK at playing games (although anyone who has been on a team with me playing Halo may disagree).

Then there's the bees, which are hard to dodge, and can tear through Shaun's life bar in no time at all, yet again kicking him back to the start of the level.

Life renewals can be bought using chicks (the game's collectable currency), but even then the inventory needs to be dipped into to restore health. So whatever way you look at it, fast reactions are required.

What chance does a young fan of Shaun the Sheep have of getting through these kinds of unforgiving challenges, and more to the point what fun will they actually get from a constant, frustrating sequence of fails and restarts? It's the worst kind of old school game design, difficulty for difficulty's sake.

It's a simple kids game that's inexplicably burdened with the sudden deaths.

There are games that can get away with punishing difficulty, such as the recent trend for bombastically hard platformers, but those are aimed at older gamers, and the sustained level of difficulty is part of the point.

Shaun the Sheep: Off His Head isn't that kind of game, it's a simple kids game that's inexplicably burdened with the sudden deaths, life bars and restarts of an earlier generation of games, redundant gameplay mechanisms that are a barrier to fun and have, quite rightly, been mostly abandoned.

To see these clunky gaming features resurrected in an otherwise well-made game based around a series popular with a wide age range is disappointing and frustrating. As a title for young and casual gamers, the tough elements of Off His Head render it unfit for purpose.

You can support Mark by buying Shaun the Sheep: Off His Head