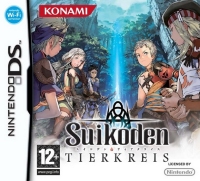 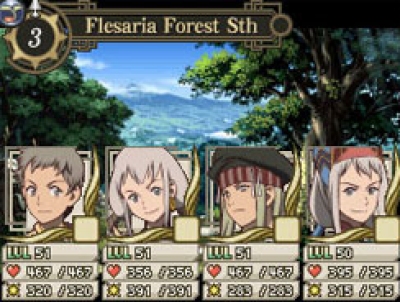 Suikoden Tierkreis DS is an amiably bonkers Japanese Role Play Game, which enlivens the restrictions of the genre with a peppy atmosphere, pacy gameplay and a sprawling plot. Along the way it takes in parallel worlds, shifts in consciousness and priggish prophecy cults.

As a time-conscious gamer with writing to be done and a tiny daughter to look after, I have to admit to being wary of role playing games, especially those from Japan. Talk of the new Final Fantasy taking half a day to just get through the tutorial, or of my Game People peers spending well over forty happy hours getting into the latest Dragon Quest, scare the life out of me (or would do, if I had one).

I wish I had the time, I really do, but I don't. Give me a rewarding main story mode that can be completed in a week of two-hour sessions or a particularly dedicated weekend, please. Call me a casual if you like, but I'm not hardcore enough to take the stronger stuff.

But that's enough about my problems. I circled my copy of Suikoden Tierkreis for a couple of months, nervous of its potential time-sapping powers, incomprehensible storyline, baffling random battles and tedious hours of grinding.

It turned out that reticence was largely unwarranted and a bit unfair. Suikoden Tierkreis (a spin-off from the core Suikoden series, which I'd never heard of before this) does have a large number of random battles and many of the other cliches of the JRPG genre, and it certainly requires a certain time commitment to get into, but for the most part it's a fun, accessible game.

It doesn't start promisingly, with your character gathering a group of young friends to leave their village, go out into generic fantasy land and deal with some low-level monsters. It's a typical RPG starter quest, and initially unfolds as you might expect: wander across the map, have a random battle, wander a bit more, have another random battle... and so forth.

As you may recall I've been here before, and I didn't like it.

The formula is less painful, but that doesn't make it necessarily interesting.

Thankfully, Suikoden Tierkreis is a bit more user-friendly than Black Sigil: the maps are relatively straightforward, the random battles are less repetitive, and there's a shortcut within the battle sections which allows your party to jump right in without you picking each move. This latter function is quite handy: it means you can apply strategy in terms of attacks when facing harder enemies, but while grinding rats you can just kick into autopilot and get it over with.

So, the formula is less painful, but that doesn't make it necessarily interesting. The more intriguing story elements seep in later in the initial mission, when the environment around you suddenly changes, and an innocuous valley is suddenly replaced with a forest containing a castle - a castle that, although no-one draws attention to this fact, is built in the shape of a man with a tall hat.

From there, it gets more interesting, and more crazy. Some people can see the reality shifts, while other's can't. Your party encounters the existence of parallel universes - but don't get to go there. However, a giant black hummingbird flies in from another universe to cause trouble.

There's a certain liveliness and invention to Suikoden Tierkreis that lifts it above the usual fantasy storytelling.

Along the way your party gains magic powers, but that's all fairly standard stuff so let's not worry about it.

Anyway, your quest to find out the secret of your magic powers, the nature of the shifting realities and so on takes your party on a quest across the land, where they steadily encounter a more immediate threat, an authoritarian religious order who believe that everything is pre-determined. Unsurprisingly, these plot threads begin to intersect.

There's a certain liveliness and invention to Suikoden Tierkreis that lifts it above the usual fantasy storytelling. Although there are plenty of giant plants, wolf things and other generic monsters, some of the creatures (especially the hummingbird) feel fairly distinct, and the plot threads about choice and determinism add enough subtext without being over-bearingly pretentious. The world as a whole is inventive and well-executed, and feels rewarding to explore for its imaginative cityscapes.

Suikoden Tierkreis was a lot more fun than expected.

The characters are fairly stock RPG types, but the designs are distinct, and there are some lavish backdrops along the way. The cutscenes are impressively animated, making for a very good looking game. Sadly the sound isn't consistently up to the quality of the visuals: the music is good (although repetitive), but performed dialogue sounds overly compressed, potentially good performances reduced to rushed, squawky sound clips.

Although I'm still not overly sold on the genre, Suikoden Tierkreis was a lot more fun than expected. Gamers who have the time will find an above average story here, one that digs beyond the usual sword and sorcery to build a more inventive fantasy world.

You can support Mark by buying Suikoden Tierkreis