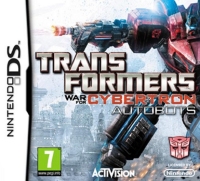 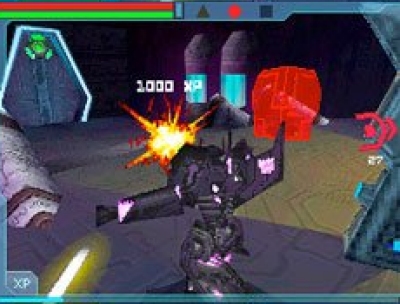 Transformers: War for Cybertron: Autobots DS takes the same story and premise as the home console game, but makes it lighter, brighter and simpler for Nintendo's handheld. The result is a breezy cartoon shooter that's fun but disposable.

I liked Transformers: War for Cybertron (360) a lot, considering it to be the most successful Transformers game yet in terms of putting the perks and abilities of a transforming robot into the player's hands.

On the 360, War for Cybertron was very much a game for adult fans, taking itself very seriously with its dark environments and splashes of moody neon.

The DS versions - as with previous Transformers games on the DS, the Autobot and Decepticon games are separate, simultaneous releases, Pokemon style - take the same story and campaigns, but adopt more straightforward and colourful stylings, in terms of both gameplay and the overall aesthetic.

On DS, the War for Cybertron is fought as a straightforward third-person shooter with a slight strategic twist whereby enemies are vulnerable to specific attacks, requiring swapping between 'bots and weapons to whittle enemy life bars down quickly.

It's simple stuff compared to the home console versions, but solidly built with a user-friendly control system that makes for some frenetic shootouts. Transforming to vehicle mode and back involves a tap of an icon on the touch screen, and there are plenty of unlockables to collect and stats to grind.

It's simple stuff compared to the home console versions, but solidly built.

Cybertron is a more colourful, brighter place on the DS, with a lot of primary colours, and the Transformers themselves are closer to their cartoon counterparts than the more intricate movie versions.

Both young and old fans of the franchise will find the voice acting instantly recognisable, and there's plenty of story dialogue conveyed over head shots of the characters during briefings, although in-game trash talk is repetitive. The music is as excitable as the rest of the game is bright.

While the simpler aesthetic works fine, and for a third person shooter on the DS the game is generally impressive, the game does suffer in terms of variety, with a limited number of enemies and a lot of identical corridors to run or drive down. Even with relatively short missions, tedium can set in due to repetition, especially as restarts can often take you quite far back into the mission.

The game is faithful to the cartoonier, brighter versions of the franchise.

DS owners looking for some giant robot action will find some fun to be had with War for Cybertron: Autobots, providing they're in the market for some very unpretentious shooting. The game is faithful to the cartoonier, brighter versions of the franchise, and both the feel of the characters and the aesthetics of the game have the ring of authenticity about them. It's not brilliant, but neither does it disgrace the brand.

You can support Mark by buying Transformers: War for Cybertron