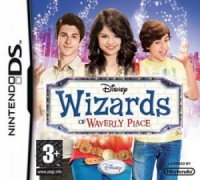 Wizards of Waverly Place DS is a child-friendly hidden object graphic adventure. It's a breezy game that suffers from a lack of drama.

It's based on a kids' sitcoms - so harmless mischief and silly mistakes are the order of the day rather than any real danger. minutes. Hijinks ensue.

As far as can be gleaned from the game itself, the backstory is predominantly Sabrina the Teenage Witch, albeit Disney-fied to a more traditional nuclear family, with a dash of Harry Potter in the inclusion of Wiz Tech, a Hogwarts-esque magic college.

So: the Russo family are all wizards - apart from the mother, who, this being a Disney production, would probably be shot if she stepped outside her allocated gender role. They live in backlot New York and run a sandwich shop, the Sub Station.

Really Wizards of Waverly Place is a series of minor incidents rather than a story.

I say story, but really Wizards of Waverly Place is a series of minor incidents rather than a story, a string of magical mishaps that need to be sorted out through walking back and forth across the map searching for certain objects, playing functional mini-games and casting spells using the DS stylus.

The world of Waverly Place is pleasantly colourful and clean, an idealised New York district with a school, a park and a couple of shopping streets. Wandering about is the most fun part of the game, and has the feel of an old school graphic adventure, albeit with only the simplest puzzles to solve.

The character models are less pleasing, bobble-headed caricatures with the plasticky, creepy slickness of a Bratz doll, although judging by the photos on the box, those fixed, gleaming smiles might actually be a part of the actors' faces rather than a conceit of the animators.

Unless you have a lot of very good, witty dialogue, humour doesn't really create gameplay.

So, a slick surface. Unfortunately there's not much beneath. Comedy makes a poor basis for games as, unless you have a lot of very good, witty dialogue, humour doesn't really create gameplay, and comedy plots don't create the kind of objectives that excite players.

Wizards of Waverly Place has perhaps two lines of dialogue in the whole game that maybe count as being vaguely humorous. While I'm entirely willing to believe that this hit-rate is consistent with a Disney sitcom, the lack of sharp dialogue just leaves the fluff of 'humorous' plotting:

Oh no, mishaps have occurred! A mess has been made! We must clean it up before Mom and Dad find out!

This fluffy nonsense isn't a good narrative driver for a game: there's no tension, no reason to push on through tasks that are, in themselves, no fun.

I played Wizards of Waverly Place from start to finish, and to paraphrase an old Peter Cook routine, while it was a short game, it is extremely boring. A lot of the tasks are blatant attempts to extend the experience by forcing the player to walk around: I got pretty sick of being sent across the entire map to pick up someone's lost keys or whistle.

A nice Place to live, but not one that's really worth visiting.

This is a game which sets out a fairly appealing world but then doesn't have anything interesting to do with it: a nice Place to live, but not one that's really worth visiting.

You can support Mark by buying Wizards of Waverly Place