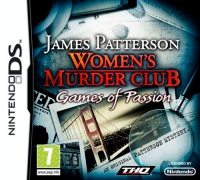 I've never read any novels from James Patterson's fiction factory and its many ongoing series. To be honest this introduction to the Women's Murder Club doesn't give me any incentive to change that.

Not that it's much of an introduction: the first major storytelling failure in Games of Passion is that the concept of the series isn't explained at the start. It's not too difficult to work out the high concept - a detective has a group of girl pals (a coroner, a journalist and a district attorney) who she meets for dinner and drinks to discuss cases - but we're obviously supposed to know that already.

The second major storytelling failure is that we're never given any reason to care, or indeed believe that this is a good idea for a series. If this is a series about a team of friends, surely they should have conflicting and complementary personalities?

Instead, all four women have one personality, a generically world weary detective persona, torn from the cheapest of TV cop shows. Their dialogue is also one-note, and can be summed up as 'inoffensively sassy': sarcastic, but never close to being witty, interesting or appealing.

You can get away with thin characterisation if you have a roaring machine of awesome plotting running beneath the surface of your story.

Of course, you can get away with thin characterisation if you have a roaring machine of awesome plotting running beneath the surface of your story, but unfortunately Games of Passion's plot is only passionate in its commitment to tedium. There's a series of murders, and a rather humdrum selection of suspects and red herrings.

Yet again, it's all very reminiscent of a filler episode of a cheap cop show, something you would have on in the background while reading the paper, and manage to follow even with most of your brain otherwise engaged.

So, we have a series of poor storytelling ingredients: dull plot, unappealing characters, flat dialogue. The execution of the game takes these ingredients, and woefully undercooks them to produce a tepid end product.

The whole game has a horrible visual style that looks like photos botched together and manipulated with a quick paint effect. Character graphics are static without even changes in pose, so that one tough senior cop has his hand attached to his chin for an entire week.

It's all very reminiscent of a filler episode of a cheap cop show, something you would have on in the background while reading the paper.

The whole aesthetic of the game is gauche, tacky and dated, from the lead character's shiny blouse to the nasty airbrush effect on the slideshow cutscenes. This cheapness is battered home by the repetitive music, which uses the kind of persistent sax and electric guitar riffs not heard in mainstream TV and film since the early 90s.

Floating somewhere in this banal soup of naffly executed crime story are gameplay elements. Well, mini-games really, pulled off some dusty shelf and thrown into the game with the thinnest narrative excuses.

A lot of these are very basic observation and memory tests - find the hidden object at the crime scene, recall the information provided three minutes before. The latter can actually be a bit tricky, just because the story details are so eminently forgettable.

The hidden object levels include a baffling 'tidy the crime scene' element where you have to click on surreally irrelevant elements in the image, like a biohazard sign on a cupboard, or a puppy that only exists in the reflection in a mirror.

Seriously, the detective sees a puppy hidden in the mirror. Surely she should turn herself in as a suspect right there and then? Look at the trouble the Son of Sam got into with his magic dog. For God's sake woman, hand in your badge and gun before the puppy starts telling you to kill people.

Definitely a story-based game where the narrative takes precedence, and the gameplay is dropped in between long sections of dialogue.

But I digress. Outside of the observation and memory games there are a few random mini-games that pop up only once or twice. And I mean random. Sliding blocks, changing colours within a series of blobs, and even a game of mahjong that you inexplicably have to play through in the middle of a crime scene, just because you found the tiles.

None of these feel like an integrated part of the story, any more than the magic puppy in the mirror. They're just stuff you have to do in between the bits where you click through dialogue.

Women's Murder Club: Games of Passion is definitely a story-based game where the narrative takes precedence, and the gameplay is dropped in between long sections of dialogue. Unfortunately it's a tedious story with unappealing characters and an off-putting style, and it fails to wed the gameplay elements into that story.