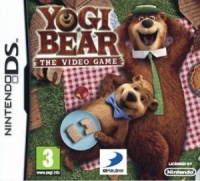 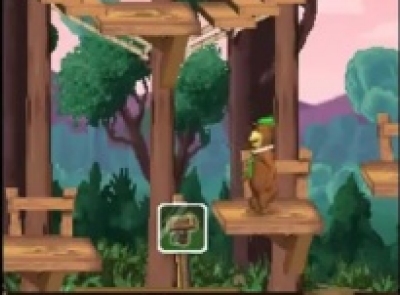 Yogi Bear: The Video Game DS is a bland platformer with some woeful presentation.

Remember the 1980s and early 1990s, when publishers like Ocean turned the films of the day into a string of generic side-scrolling platform games, regardless of whether such a game was in any way appropriate for the movie in question?

Well, consider yourself blessed, nostalgics, because Yogi Bear: The Video Game is a total throwback to those times, a phoned-in and charmless exercise in shovelware.

Jellystone Park is in trouble: the park is broke, the Mayor wants to sell it to loggers, and visitors are complaining about a bear stealing their pic-a-nic baskets.

What does Yogi Bear need to do to sort out this mess? Well, predominantly he needs to run from the left hand side of each level to the right hand side, collecting items along the way and dodging threats, until he reaches an arrow that means the level is over.

The storytelling and presentation framing that gameplay are downright off-putting.

That's really about it. There are cogs that can be collected to build gadgets to help you reach difficult items, and a notoriety meter that acts as a life bar, but generally speaking running to the right and steering clear of tourists, racoons and squirrels should do the job.

Running and jumping controls are more or less fine, although sticking a landing can feel a bit slippy. It's just all so... uninspired. The graphics are bland, and the background music sounds like its been taken from a corporate training video.

If the base game play is uncharismatic, then the storytelling and presentation framing that gameplay are downright off-putting. Cut-scenes use still, slightly fuzzy images taken from the film. The same images of the boggle-eyed horror that is the film version of Yogi appearing again and again, along with shots of the human cast members snapped mid-gurn.

Beneath the dire presentation there's a mediocre side-scrolling platformer.

It looks horrible. Judging by the standards of most cartoon-to-live-action movies, the film probably is horrible, and that horror has just trickled down in to the game, drip by tedious drip.

Beneath the dire presentation there's a mediocre side-scrolling platformer at the core of Yogi Bear: The Game. Probably best to leave it where it is.

You can support Mark by buying Yogi Bear The Video Game